1 Fast 9 Is Being Boycotted for the Strangest Reason, and John Cena Is Sorry

2 Helen Mirren Gets Her Wish, Mad Drives a Supercar in F9

3 Here’s More About the Badass Women of Fast 9

5 The Wait for Fast and Furious Just Got Longer: Fast 9 Delayed Once More
Up Next

Come Friday, June 25, the extended and frustrating wait for the latest installment in the Fast and Furious franchise, Fast 9, will come to an end. Fast 9 is welcoming audiences back into theaters and kicking off the blockbuster summer.
7 photos

That means we’re in for a week loaded with Fast 9 bits and pieces, which is why this interview with Helen Mirren on Jimmy Fallon fits right in. The actress agreed to a sit-down with Fallon, but on her own terms, zooming from her home as she was taking a bubble bath. Leave it to the queen to conduct an entire interview covered in bubbles without looking any less classy!

Among other things, Mirren recalled that time when she had to shamelessly beg leading man and producer Vin Diesel for a part in the franchise. That was several years ago, and, of course, the story is well-known, but it’s still funny to hear it from her. “I begged, I was shameless. Absolutely. I begged, I moaned, I whined, I cried a little bit, I pulled every trick that I could possibly pull. He very kindly acquiesced,” Mirren says.

Now at her third appearance in the franchise as Magdalene Shaw, a.k.a. “Queenie,” Mirren finally got her wish: that of mad driving a supercar. This isn’t news either, since footage of Queenie drifting a purple Noble M600 was included in the early trailers. But the interview does bring an extended look at that scene, which includes a police chase in London, heading to Buckingham Palace, and a chat with Dom about who the dark mysterious gentleman out for his blood is. It’s not a spoiler to say he’s Dom’s brother.

The film footage starts at the 1.50-minute mark. The Noble M600 is a rare, V8-powered, hand-built British supercar that retails for about £200,000 (approximately $278,500 at the current exchange rate). Mirren got to drive it, but she wasn’t allowed to drift it, which, yeah, makes sense. 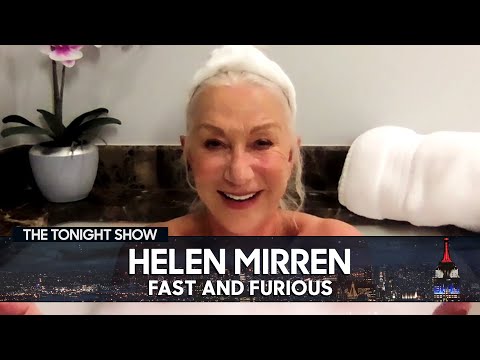