5 GTA V with Every New Mod Is How Rockstar Could Get Chaos Right
Car video reviews:
Up Next

GTA V Player Performs Stunts with Every Type of Vehicle, This Is No Picnic

If it wasn’t clear already, the never-ending fun in Grand Theft Auto V doesn’t come down to the single-player campaign anymore but to the millions of other things that you can do in the game, including in the online mode.
1 photo
Stunts in GTA V have become pretty common lately, especially because players out there come across more and more challenges, some of which take days to actually perform.

And as if that wasn’t already super-difficult, expert GTA V player who goes by the name of Hazardous on YouTube has decided to go for something even more challenging: he tried to do a stunt with every single vehicle category in the game.

So in other words, he performed not one, not two, but seven different stunts using a truck, a boat, a bicycle, a helicopter, a motorbike, a plane, and a car.

While I won’t comment too much on what the eyes can see if you hit the play button in the video below, don’t imagine that doing the whole thing is easy, though at the first glance, the skydiving trick, which involves jumping from a helicopter, is something anybody could do after only a few tries.

But at the end of the day, all these stunts show that getting bored of Grand Theft Auto V isn’t actually possible given how many things you can do in this game, and without a doubt, it’s one of the reasons so many people keep playing it even eight years after its launch.

But in the meantime, everybody is getting ready for the enhanced version of GTA V for new-gen consoles that’s projected to see the daylight in the fall.

As it turns out, not only that this new release would bring some new content to players, but there’s also a chance Rockstar would use live events in GTA Online specifically to tease the next iteration of the game which should be here in approximately two years. 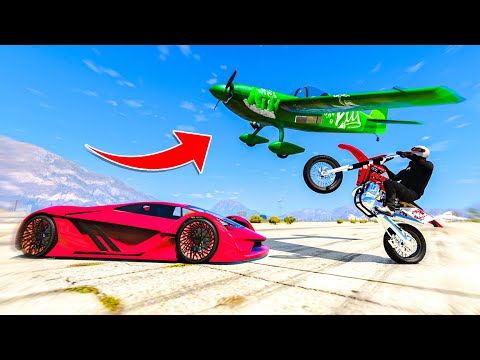