Gabriel Nica
Looking at a BMW E92 M3 and a Bentley Continental GT you’ll definitely go completely, all out for only one of them because the two just don’t compete in the same league.
1 photo
You’ll either prefer to cruise comfortably with plenty of power at the tips of your toenails or you’ll be one of those guys that has just enough power to everyone else to shame, knowing his car’s limits to perfection.

Apparently, there’s a third option out there. The massive 2.3 ton Bentley can keep up with an M3 on a winding, mountain road if the driver knows what it’s doing. Furthermore, it has an even more enticing soundtrack to it, the whole way.

The guys from WorldSupercars had the chance to go on a ride in a Bentley Continental GT fitted with their trademark W12 6-liter engine making 575 HP and 700 Nm (516 lb-ft) of torque. They car they were in was driven by a girl that really knew what she was doing, not only keeping up with the much more nimble and light M3 but also braking and letting him go whenever it was the case.

The driver of the M3 was also putting on a show, trying to impress the lady driving the Brit with his moves and ‘just’ 420 HP. On a car that weighs nearly half a ton less than the Bentley, it’s plenty for any kind of road. The more twisted it is, the better. Furthermore, you get an awesome soundtrack all the way from 20 cylinders. 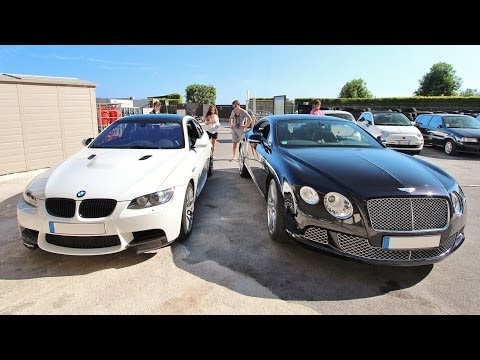