Alex Oagana
Over a year has passed since Mercedes-Benz let the current E-Class loose on the biggest markets, but most of the model's qualities have become pretty common nowadays.
6 photos

At first, Stuttgart called the E-Class W213 “intelligent” mainly because it was partly autonomous and was fitted with better self-driving technology than its big brother, the S-Class. The Sonder Klasse has since been facelifted, though, meaning that the E-Class is now a bit less impressive.

Globally, most carmakers are still stuck somewhere between Level 2 and Level 3 autonomous driving technology, with all of them expecting to reach Level 4 and Level 5 somewhere around 2020.

In short, in a Level 4 car, you will be able to take a nap while the car drives by itself, but you can still use a steering wheel whenever you feel like it. In a Level 5 vehicle, you are always a passenger and never a driver, while the current E-Class is somewhere between Level 2 and 3. This means that you have to always keep an eye on what the car is doing, even when you're not holding the steering wheel.

Obviously, automobiles need a truckload of sensors to achieve Level 4 and 5 autonomous driving, which is why the E-Class prototype in the following video looks like a weird camera car that was built in a shed.

If you watch closely, all four corners of the car are decked in radar and laser sensors, while the grille has one that looks like a small robot. On the roof, we can find a giant aluminum assembly which includes two lidar-looking thingamajigs as well.

Keep in mind that the prototype is more or less a mule for testing technology, and it doesn't mean that the refreshed E-Class will go fully autonomous, but if we were to guess, the features being tested should arrive on a Mercedes-Benz model slightly ahead of 2020.

The Mercedes model most fittingly to be introduced with this type of technology is, of course, the S-Class flagship, which is set to receive a new generation sometime during 2019. Until we start seeing pre-production prototypes of that car testing, this motley array of self-driving sensors on a current-generation E-Class will have to do. 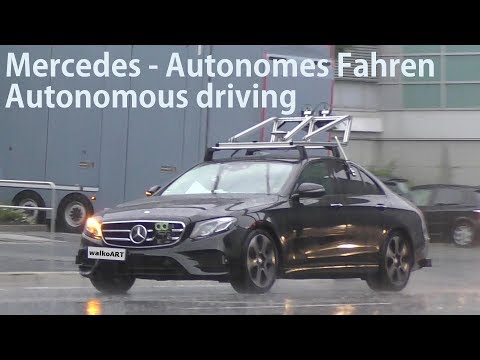