4 Virgin Racing Partners Up with DS Brand for Formula E

Copenhagen Gets 400 BMW i3 EVs to Improve Interconnected Mobility

Vlad Mitrache
We look forward to the day when a woman racing driver will not be a newsworthy subject, but with the current status-quo in motorsport, a move such as this remains something that needs pointing out.
1 photo
We do this in hope of more and more women gaining the courage of following their dreams and doing whatever it takes to make it to the big stage, whichever that may be - WRC, Formula 1, WTCC or DTM.

For now, though, Formula 1 remains a closed subject, the only way for a woman pilot to get her hands on an F1 car being as a test driver. It will come as little surprise, then, that our girl of the moment, Simona de Silvestro, did exactly just that, acting as a test pilot for Sauber F1 team last year. Apart from that, she was also involved in the previous season of Formula 1, taking part in the Geneva demonstration as well as the two closing races of the Championship held in London.

She may not have won any of those races - in fact, she finished eleventh and thirteenth in the two competitive stages she partook - but she's convinced the people at Andretti Autosport team to sign her on as a full-time pilot for the next season.

The Formula E Championship is proving to be a pioneering series in more than one way, doubling the alternative propulsion with an open attitude towards gender-neutral pilot selection.

However, Simona de Silvestro's record extends further than last year's accomplishments, having driven in the IndyCar Series for the past several seasons (where she went through a pretty nasty firey incident that you can see below).

She isn't the only woman to drive a Formula E car, though, sharing this honor with two other girls: Italy's Michaela Cerruti who raced in the first four stages and the Briton Katherine Legge who only drove in the first two races.

The next season starts in October and only four seats remain vacant. As of now, Simona de Silvestro is the only woman with a full-time agreement with one of the teams, but there's still time for that to change. 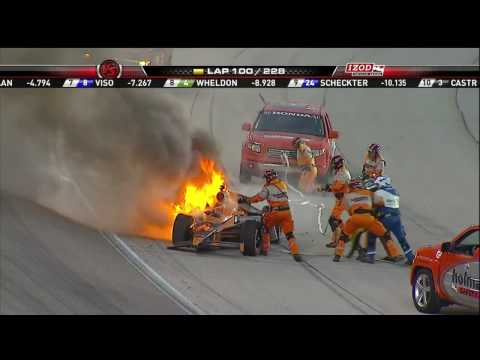