1 Virgin Racing Partners Up with DS Brand for Formula E

5 Formula E Is Coming to Monaco, Circuit Layout For the ePrix Gets Detailed
Coverstory

Tudor Rus
Qualcomm takes the electric movement very seriously as if they were the surfer riding the wave of green cars that's been washing the automotive industry lately. So to stay on top, their only option is to keep on innovating.
1 photo
Speaking of innovations, the company - which is also a primary sponsor of Formula E - plans to launch a wireless charging system for EVs and it already took steps towards that goal.

The video below addresses this issue, but also starts with a simple question: how can we accelerate the future of cars? Of all the possible answers one could give, Qualcomm chose this: "we're bringing wireless charging to electric vehicles".

As exciting as it may sound, things are still in an incipient phase. However, this hasn't prevented Qualcomm from building a wirelessly charged remote control car.

Now, if you remember, Qualcomm presented their Halo wireless electric vehicle charging tech (WEVC) using modified BMW i8 and i3 course cars at the official debut of the Formula E Championship.

The system used a ground-based charging pad that can be installed in a garage, parking facility or on the roadway. It is designed to make the process of charging almost invisible, but it's not magic, it's science: Through resonant magnetic inductive power transfer, the EV is charged wirelessly, without the driver needing to plug in.

Imagine you'd benefit from this on a daily basis and all you had to do to charge your car would be to only park on top of such a designated spot. Sure, taking an RC car and pitting it against a full-size Formula E racer driven by Lucas di Grassi won't stand for a fair duel, but the tiny car handles itself pretty well, even when executing donuts on the asphalt. 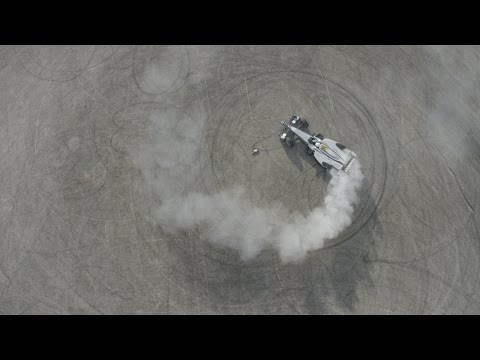