Mircea Panait
The Smithers Winter Test Center in Michigan is known for cold-weather tests of pre-production vehicles, and more recently, Ford filmed a promo of how the Mach E copes in sub-zero temperatures. As you can tell from the following video, powersliding on snow and ice doesn’t pose a problem to the Mustang-inspired electric crossover.
29 photos

Ford Motor Company explicitly labels the vehicle in the clip as pre-production, claiming that the lithium-ion battery was tested at temperatures as low as -40 degrees Fahrenheit. That equates to -40 degrees Celsius, the type of temperature that would pose a problem even to internal combustion-engined vehicles such as the Mustang.

There’s a scene in the video that shows the rear wheels spinning while powersliding, which is good news if you’re the kind of person who believes that front-wheel drive is wrong-wheel drive. But from the few pictures released by Ford of the Mach E, we’re more inclined to believe the e-crossover has a dual-motor setup for all-wheel drive.

In addition to the first, Ford has also released a second video of the Mach E at the Grattan Raceway. What’s most surprising is that the track’s surface is far from perfect yet the e-crossover appears to feature a pretty good ride quality. Even in the twisties, the newcomer doesn’t show too much roll despite its considerable weight.

Ted Cannis, the global director of electrification at the Blue Oval, also makes a case for instant torque, an awesome driving experience, and that the Mach E “accelerates like hell if you want.” On the downside, foot-to-the-floor driving will deplete the energy in lithium-ion battery quicker than you’d expect, regardless of weather and road conditions.

“More than 300 miles” of range is what the Ford Motor Company promises from the Mach E or whatever it will be called, and under the WLTP standard in Europe, make that 370 miles or 34 more than the Model Y Long Range from Tesla. Production is set to take place at a facility in Mexico for the entire world, and the Mach E is expected to be revealed in November 2019. Deliveries are thought to begin in 2020 for the 2021 model year. 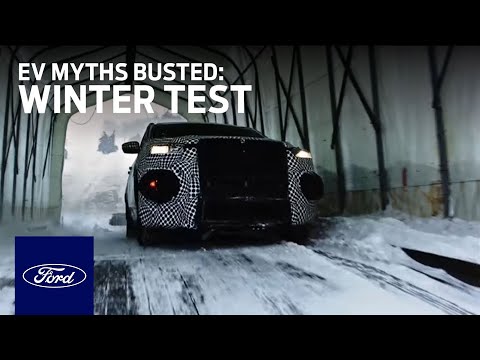