Sir, Mind If I Jump on Your Car and Then You Pay Me? Too Late, I Already Did

Ford Catches Up with the Rest, Makes Progress Towards Self-Driving Cars

Vlad Mitrache
In Europe, it’s estimated that the average driver loses about 30 hours every year being caught in traffic jams. You may think that’s not really that much, but your family might beg to differ: heavy traffic is making you waste more than one day per year, time you could have been spending with them. Or, you know, fishing or lying on the couch, whatever floats anybody’s boat.
1 photo
Ford, like any other major manufacturer out there, is well aware of this and is promising its customers a solution. Well, sort of, since you’ll still be stuck in traffic, but at least you’ll be able to do something else with your hands and mind during this time (sort of, but more on that later).

We’re talking about the good old traffic jam assist, a technology that’s already in use on other cars. The basic idea is that since crawling through a jam isn’t really worthy of being called “driving,” then why should the “driver” be bothered with it? Why not let the car take control and let the “driver” become an “e-mailer”? Or a “phone caller”? Or, why not, even a “thinker”?

Ford plans to do this with the help of a bumper-mounted radar and a front-facing camera behind the windscreen. These two are already in use for two other very familiar functions: adaptive cruise control and lane centering.

The radar is used to measure the distance between the vehicle in front and decide when it’s time to accelerate and when to brake. The camera, on the other hand, scans the road markings and keeps the vehicle centered in its lane. When these two work together, you’ve got yourself a traffic jam personal assistant that will completely take over all driving inputs. The driver can cut in at any moment by using the pedals, steering wheel or the indicators.

Since Ford doesn’t want this to resemble an autonomous system in any way and then watch clips on YouTube with morons doing moronic things in its cars, it forces the driver to interact periodically with the steering wheel, or otherwise it will emit acoustic and visual warning signals. So keep at least a hand on the steering wheel unless you want to make Ford mad.

“For many drivers, experiencing heavy traffic on the way to work can leave them stressed and angry, even before the work day begins. Traffic Jam Assist helps the driver maintain the distance to the vehicle ahead and helps to keep the vehicle centred in the lane. The system aims to reduce driver stress in dense,” said Reid Steiger, technical expert, Automated Driving, Ford of Europe.

This system isn’t yet available, but it will be equipping Ford models shortly. More info on that as it becomes available 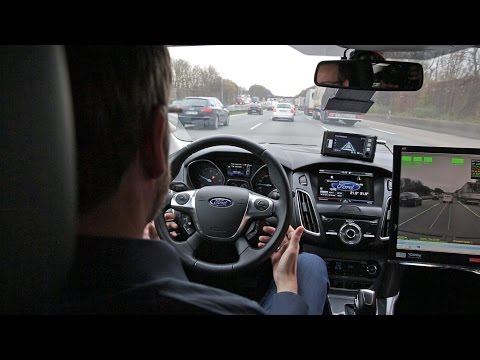