2 Hoverboards and Their Destructive Capabilities Caught on Tape

3 The Hoverboard Issue Is Reaching New Heights, God May Soon Get Involved

4 Forget About Those Flammable Hoverboards, ARCA Has Come Up with the Real Deal

5 Hendo Hoverboard 2.0 Is Tony Hawk Approved, but Still Needs a Copper Deck to Work
Car video reviews:
Up Next

Florida (of Course) Company Invents the HoverCart, Hoverboard Not Included

The whole hoverboard saga was really fun to watch (this video here being our favorite) while it lasted, but sadly that wasn't very long. Soon, they started catching fire out of the blue so they were first banned in airplanes, then on public property (in the UK, at least), until finally, all hoverboard imports in the US were blocked due to patent-infringement claims made by Segway.
10 photos

So while this was indeed a craze, it was a short-lived one. However, there are plenty of people who managed to get their hands on a hoverboard while they were still available, and unless something drastic happens like electing a dictator for president, nobody's going to forcefully take them away from their owners.

Nobody really thought about this until now, but there's an untapped market here with immense potential: creating accessories for hoverboards. There's a good reason for that, you'll say: apart from a helmet (full-face, preferably, so you can hide your shame) and a fire extinguisher, what else is there to "accessorize" a hoverboard with?

You see, this limited thinking is why you won't be making loads of money off the HoverCart, and some dude from Florida is. With just a few aluminum tubes, a set of wheels, a hitching system and a garden chair, this man is able to transform the hoverboard from a geeky transportation device into a lazy man's dream. And I'm willing to bet the learning curve for using the HoverCart is a lot less steep than the hoverboard's.

Its creator describes the HoverCart as a "new invention that makes a hoverboard safer and much more fun." We would have insisted on the practicality aspect a bit more (not only do you get to sit but you can also hook a boat trailer or another passenger module to instantly double the number of persons it can carry), but we're not entirely sure what they mean by "safer." Is it that, by sitting a few inches away from the actual hoverboard, you get more time to react in case it catches fire, or that you're less likely to fall over and break a TV set?

You may think the garden chair is a little too much, and it would look better with something less... stripey, but if you watch the video (and if you've seen the thumbnail, we're sure you will), you'll notice that its elasticity is the only form of suspension for this rig, apart from the air in the rear tires. So anything less bendy is going to make for a much bumpier ride.

The thing is being sold for $69 (in stock at the end of May), which seems just about right considering what goes into making it. Will this thing be a success? Well, the people of Florida would be mad not to get one, or at least hurry and make one themselves while the patent is still pending. 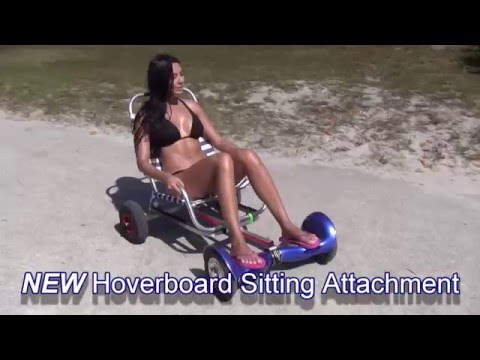 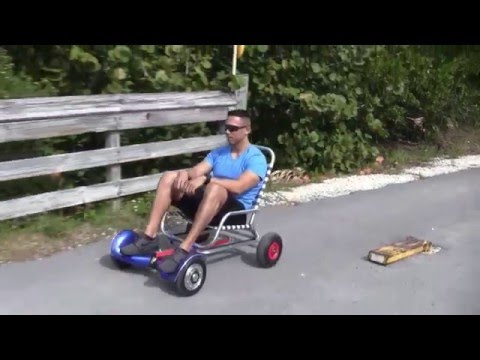