1 Hoverboards and Their Destructive Capabilities Caught on Tape

2 The Hoverboard Issue Is Reaching New Heights, God May Soon Get Involved

3 Forget About Those Flammable Hoverboards, ARCA Has Come Up with the Real Deal

Hoverboards are becoming harder to get than some hallucinogenic drugs, but those teens who have managed to secure them before they became the evilest thing on Earth are making good use of the tiny personal transportation devices.
1 photo
We’ve seen people using them for shoplifting or priests holding the mass while balancing on one of these things, but this teen from Ontario, Canada, sure beats them all. He’s basically turning the still not properly named hoverboard into a snow plough.

Those living closer to the Equator have no idea what it’s like to move tons of solid water from one part of your driveway to another so that you can get out of the house or take out your car. It’s not a particularly enjoyable experience as it can result in back or muscular pain. It’s a solid workout, granted, but it’s one that doesn’t give you the option of skipping it or postponing for the next day.

With that in mind, every little thing that can make this procedure easier is more than welcome. Looking at this clip, you have to ask yourself if riding a hoverboard does indeed make it easier, or is just this guy that makes it look that way. Because unless you’ve spent a large amount of your life riding these devices, you’re probably not going to be able to pull the same pirouettes this 14-year-old kid, Julius de Paz, is so casually doing.

Another drawback is that you still have to put your knee-high boots on and clear some of the snow the old-fashioned way because the hoverboard will most definitely not work unless it has some clear pavement to roll on.

The person filming the process is the guy’s mother, and she says that her son also hovers around while vacuuming, sweeping or taking the trash out, Hamilton Spectator reports. Julius de Paz is already planning his next hverboard move: mowing the lawn in the summer.

As unproductive as it may seem, there is a bit of a silver lining to clearing the snow on a hovercraft: should the device suddenly burst into flames, there are at least large quantities of water around that can put it out easily. Either that or Julius de Paz will have pioneered another way of clearing the driveway: melting it with a burning hovercraft. 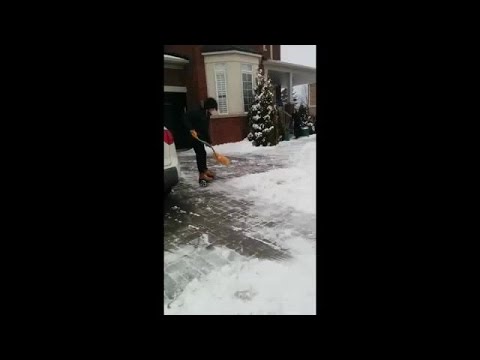