Safety comes first.... at least nowadays. We now see how year after year every carmaker in the world is constantly improving safety features for its vehicles. Today, they not only battle on offering consumers a variety of infotainment systems, increasing comfort and the latest technology features, but they also work on improving both the passive and the active safety. The safety belt, for example, took a long while until being considered a must-have. This progress in giving their best to protect the vehicle occupants from injuries or even death is mostly work of certain organizations that stimulated carmakers by giving them a bad name when revealing test results through media. ORIGINS AND EVOLUTION

Home > News > Coverstory
Alina Dumitrache
Before the 1960s, highway safety advocates were fighting in preventing accidents by changing the drivers’ behavior and only paying minimum attention to engineering. However, reducing the consequences of crashing was left aside. One of the organizations that changed the course in automotive safety was the Insurance Institute for Highway Safety (IIHS), founded fifty years ago (1959) by US insurers, at first as a research support body. Back then, carmakers said vehicle characteristics were irrelevant because people caused crashes, so people, not vehicles, needed to change. 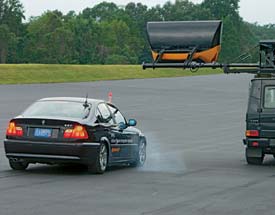 However, following an extensive review of the Institute's Board of Governors, IIHS changed its profile nine years later (1968) and began conducting its own research into a series of safety concerns. Today, IIHS works to reduce the number of vehicle crashes, the rate of injuries and the overall cost of damage in the crashes that still occur. Moreover, it tests and rate popular passenger vehicles as well as a number of consumer products such as child car booster seats.

In addition, as the Institute expanded its activity in vehicle safety, a separate organization was formed dedicated to gathering information. Called the Highway Loss Data Institute (HLDI), this satellite organization focuses on collecting numerical data on automobile accidents. According to IIHS, the research covers three different areas:

In 1992, the Vehicle Research Center (VRC) was opened, which includes a crash test facility, and where most of the Institute's vehicle-related research is conducted. The main activity at the VRC is crashing cars to test them for safety, mostly for consumer information. 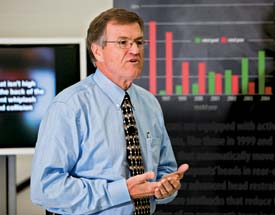 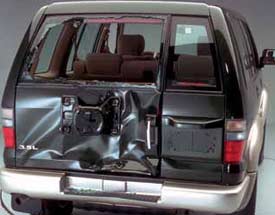 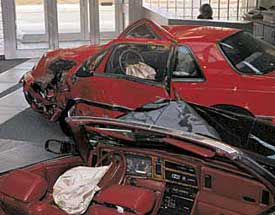 Vehicles are rated for safety based on performance in front, side, and rear tests. Carmakers also take these reports into consideration and work on improving the designs of their vehicles to earn higher marks than the competition.

The system that propels the vehicles to impact can accelerate full-size pickup trucks to 50 mph on the VRC's two 600-foot runways or to 25 mph on a 200-foot runway situated perpendicular to the longer ones. A unique feature of the center is the system that provides up to 750,000 watts of illumination without glare to film crash tests at multiple angles. IIHS says that the resulting pictures are so clear and dramatic that video of VRC tests attracts wide coverage on television news.

However, not all the tests are conducted by crashing entire cars. Car components or related consumer products like head or child restraints are being tested on a sled that runs on fixed rails to simulate a crash. In many cases, dummies are positioned in or on the components to properly measure the level of damage. Speaking of dummies, they simulate the movement of humans in real crashes and record the forces that would be inflicted on the body. Each dummy includes 25 to 40 sensors to record forces on the head, chest, abdomen, legs, and other body parts. They are first calibrated and only then are positioned in vehicles or certain components subject to tests. 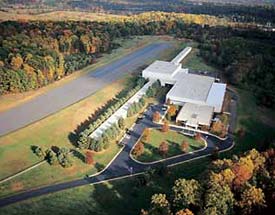 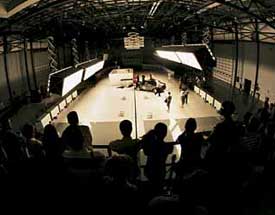 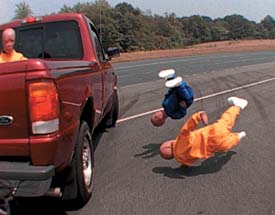 INSTITUTE RESEARCH AND TESTING
The IIHS uses four ratings for each category, "Good" (best, green G), "Acceptable" (yellow A), "Marginal" (orange M) and "Poor" (worst, red P). The researchers at IIHS are crashing vehicles in all kinds of ways, evaluating the results gathered after conducting frontal, side and rear crash testing. There is also a coveted Top Safety Pick designation offered by IIHS to vehicles receiving a good rating in all three crash tests plus Electronic Stability Control. 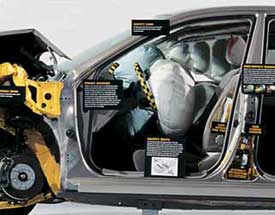 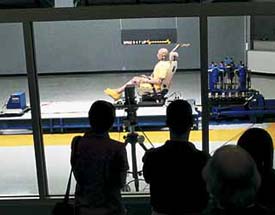 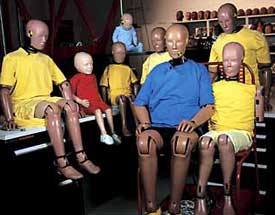 Frontal Crash Test
The frontal test program was initially preceded by studies of real-world crashes and tests involving various degrees of overlap between colliding vehicles in front-to-front crashes. Today, the vehicle is hitting a deformable barrier in an off-set manner, meaning that only the driver's front end is stricken. The test is conducted at 40 mph (64 km/h), and around 40 percent of the car's front end impacts the deformable wall. Side-Impact Crash Test
Following some research conducted by the Institute’s specialists, which found that women in side-struck vehicles are at higher risk than men, and the risks when hitting high-riding vehicles are bigger, IIHS has a different approach in conducting side impact crash tests. 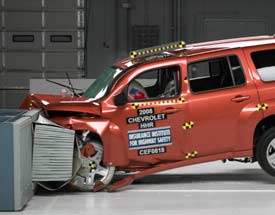 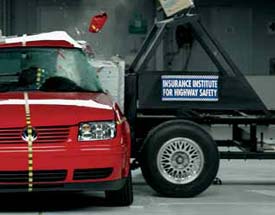 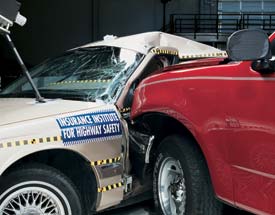 Therefore, the deformable barrier developed into a moving barrier with a front end like a pickup truck or SUV which weighs 3,300 pounds (1497 kg). After being slammed into the side of the vehicle at 31 mph (50 km/h), computers measure the potential of serious injuries to the head, neck, chest, abdomen, pelvis and femur of the crash test dummies. Rear Crash Test
Currently, IIHS is the only US organization to asses rear crash protection, conducting both static and motion tests. The vehicle's seat is subject to the testing in order to determine the effectiveness of the head restraints and measure injuries in the neck region. After these tests are completed, computers measure the impact forces that acted on the head, neck, spine and torso and a combined overall rating is then achieved.

This is a special test conducted by IIHS in the VRC, as a vehicle is crashed two times at 5 mph (8 km/h) into a flat barrier (with both the front and the rear bumpers), one time into an angled barrier with the front bumper and then into a short pole with the rear bumper. The usual “Good” to “Poor” ratings are then given, only this time they are based on the accident repair costs.