2 First Fiat 500 Commercial for the US Released

3 US Fiat 500 Will Have Bigger Cupholders

Fiat's Blue & Me to Take the Lead from Ford's SYNC 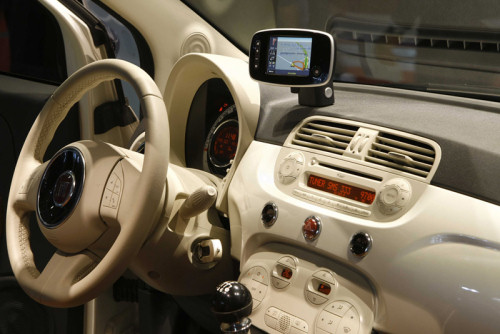 Ford may lose its technological upper hand, as Chrysler's alliance with Fiat is starting to become lucrative. Ford's 'Sync' revolutionary tool, jointly developed with Microsoft, enables voice control of phones and audio systems, being rated as the top reason people choose a Ford, Lincoln or Mercury over vehicles from other brands. Now all that is about to change with Fiat introducing a similar system on its 500 supermini.

Fiat worked with the software giant to launch a version of the system in Europe before Ford did in the US. Chrysler already had a U-Connect option on its vehicles, but it was less user-friendly than Ford's system.

Fiat's Blue & Me includes voice control of radio, phone and music players connected either by USB or Bluetooth. It also offers voice connectivity with the Tom Tom navigation system offered as optional. The system wasn't as popular as it should've been at the Fiat 500 launch at the Los Angeles auto show this month, despite being one of the car's key advantages. Perhaps more important is the fact that the extra could become available in Chrysler's range as early as 2012.

"Blue & Me will offer customers the ability to use their handheld and mobile devices while keeping focused on driving," said Joe Grace, vehicle line executive for the Fiat 500.

The most interesting feature is, when combined with the navigation system, Blue & Me's ability to record data about the driver's habits and download it to an USB stick. The information can subsequently be transferred to a website set up by Fiat called Eco:Ville. Drivers will then have the opportunity to compete for the lowest fuel consumption and emissions.

Blue & Me comes with a $500 option package including leather-wrapped steering wheel with Sat Nav controls. The option becomes standard equipment in higher trim levels such as Sport or Lounge, that cost $17,500 and $19,500, respectively. The navigation system is a $400 option on the 500 Sport and Lounge.

What remains to be seen is whether Fiat's toy will become as successful as Ford's Sync.