3 The Most Interesting Convertible Roof Mechanisms on Modern Cars

4 Watch How Not to Test Drive a Ferrari California

Ferrari has paid homage to the 458 GT3 that won the Pro-Am Cup in last year's edition of the 24 Hours of Spa with a special version of the California T.
16 photos

The custom example of the convertible Ferrari was created through the Tailor Made program, the company's bespoke workshop. The result was unveiled at this year's Brussels Motor Show, and the vehicle is made in collaboration with a Ferrari dealer from the same town as the famous racetrack.

The car has a distinctive livery, inspired by the 458 race car. We're talking about a Rosso Corsa paint, over which the specialists at the Tailor Made workshop drew red, blue, and white stripes, just like on the 458 GT3. The vehicle also features yellow edges on the rims, themselves painted in a matte Argento Nurburgring, along with yellow accents on some of the body parts.

The California T's interior is also inspired by the 458 GT3. While it doesn't feature any race-ready elements, it has matte black carbon-fiber trim and is covered in a dark Alcantara. The seats are upholstered in Alcantara and feature accents made from a fabric that has a high level of grip. The vehicle's foot wells are decorated with black painted Aluminum, and the carpets, floor mats, and boot mat are finished in Black and made from a special material called SuperFabric.

As usual, Ferrari didn't specify the cost of this bespoke example. We do know that the vehicle was commissioned through Francorchamps Motors, one of the brand's three authorized dealers in Belgium. Most likely, the vehicle will end up in the possession of a customer from the same country. 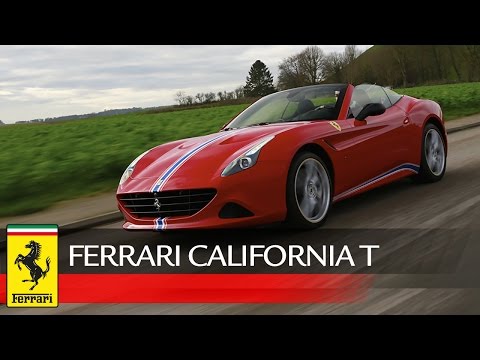