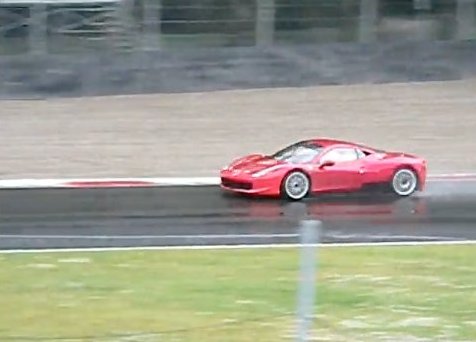 The Ferrari 458 Italia Challenge is an eagerly awaited vehicle, with the Italian carmaker keeping all its official and unofficial marketing mouths shut when it comes to this project.However, back in May a set of pictures of the car surfaced the web. Now, we have an additional drooling stimulus, as a video showing the car in its natural environment, has appeared on Youtube.

The footage, which is called “458 Challenge Test @ Monza / 16 june 2010”, offers 18 seconds of joy and shows a car that seems to be identical to that in the aforementioned images.

The 458 Italia racer prototype surfaced on the web is packed with motorsport equipment, such as signalized tow hooks and hood locks. It rides on a set of lightweight, generously-sized alloy rims that are wrapped in racing tires and house ultra-large carbon ceramic brake rotors.

The car sits closer to the road compared to the road going version of the 458 Italia and comes with multiple aerodynamic revisions, including a redesigned front fascia, which comes with a new central air intake and new type of grille.

The car also uses aerodynamic profiled side skirts and plastic windows that help keep the weight down. The car’s interior also comes with special racing equipment, such as a rollcage and a set of racing seats.

The Ferrari 458 Italia Challenge is expected to be released by the end of next year. Let’s hope that Ferrari will release at least a part of the racecar’s official details until then.