2 Care For Some Car VS Bike Canadian Road Rage?

4 Drag Racing Pocket Bikes Is Funny But Sometimes It Hurts

When you usually think of an electric fence, the picture of some drunk teens trying to mimic the stars on Jackass is probably the first thing that comes to mind. However, this clip of some guys getting their bicycle stuck in the live wires is gaining popularity fast and will probably be the best thing you’ll see today.
5 photos

OK, so now you are wondering how the heck do your bicycle gets stuck in an electric fence? Were you blind? Drunk? Lost a bet? No, it’s simpler than that and thanks to the video’s description we get to know the reason.

“Whilst pedaling today, my mate Paul went to put his bike over a fence,” the uploader tells. “Half way though he realized that it was electric! So he dropped it on the fence. This is a video of him and my mate Al trying to get it off! Please excuse the swearing and oh yes by the way the clicking sound is the electric pulsing!!”

So, how do you recover your bike back from the grasp of thousands of volts? One thing would be to avoid touching the wires and any other metal part that comes in contact with them directly or indirectly. This means you need to keep your fingers away from the frame, pedals, handlebar, cables, and rims.

You might be tempted to grab some fallen tree branches and scoop it out of the danger zone. But as the video demonstrates here, if that wood is damp, you’ll still get shocked and the guy that will film you will start laughing like Mutley.

However, it is best not to end up in this situation, so before you touch or go near any other wire fence, look for signage. Or check for insulators on the posts. This is a dead giveaway the wires are carrying electric current. 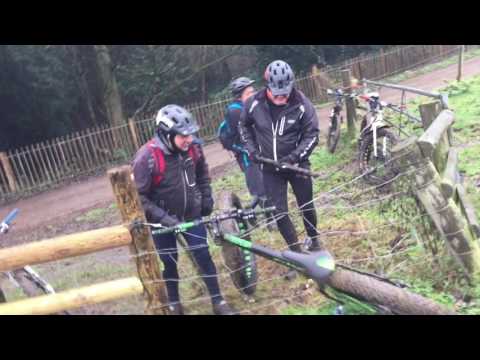