5 Verde Scandal Lamborghini Aventador Flips Over in California
Up Next

If Your Seat's a-Rocking, Your Autonomous Car Needs Your Attention

Employee of the Year Material: Man Crashes Boss' Lamborghini While High on Coke

Driving under the influence is a serious felony, but people keep doing it. When combined with speeding and supercars, things are bound to go wrong.
1 photo
A 29-year-old man who should have known better wrecked his boss’ Lamborghini Murcielago in March. Police discovered that the driver was under the influence of a controlled substance when the incident happened, and the level of that substance in his bloodstream was actually three times over the legal limit. On the other hand, he tested negative for alcohol in his blood.

The substance we are talking about is “benzoylecgonine,” the primary metabolite of cocaine, of which he had thrice the legal limit, as mentioned above. If you are wondering why there is a legal limit for this particular substance, it’s because this is also the main ingredient of a prescription muscle pain reliever.

On May 10, 2016, Cary Atkins was banned from driving, fined, and ordered to do community work for his deed. His fine was set at 85 pounds in costs and 60 pounds in victim surcharge. The work he’s sentenced to do consists of 150 hours within 12 months of the sentence, and he is not allowed to drive in the next two years.

Atkins was an employee of a classic car dealership, and he was reportedly allowed to drive the vehicle. It goes without saying that he was not authorized to drive while intoxicated in any way.

The Murcielago was crashed into a railing and then caught fire. See the picture at the top of this article? There’s a Lamborghini behind those flames. The vehicle belonged to the company Atkins worked for, and the man was fully insured to drive it. However, it is unclear whether he was allowed to keep his job after the incident.

Atkins claims he used to pick up his daughter in that car every weekend, as the Daily Mail notes. The driver also stated that he assumed his level of intoxication was under the limit and that he had had a “heavy night before.” Apparently, he blames the accident on “putting his foot down too hard on the pedal and losing control.” 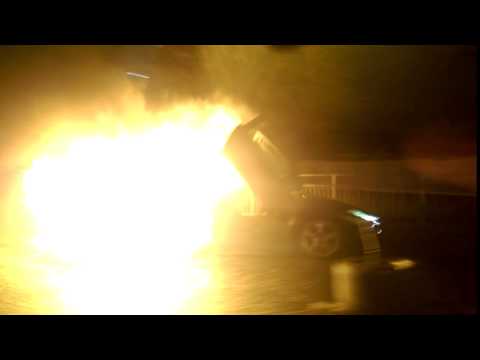