1 What Do You Call 2,000 Subarus Bundled Together? A Record, That’s What

5 How a 1956 Porsche 356 Turned a 64-Year-Old Mother into a Racer, Champion
Car video reviews:
Coverstory

Ask anyone and they'll tell you the U.S. is the home of drag racing. However, ask a certain pair of cousins from Denmark, and they might offer a different answer.
5 photos

The two are active under the name of True Cousins, and if that sounds somewhat familiar, it's for two reasons: first, you might have heard it before as they were involved in a 1/8 mile EV record three years ago, and second, it's silly enough to stay in your brain once you hear it.

Nothing about what they do is silly, though - on the contrary. After starting with a 12 kW motor for their bike twelve years ago, they've multiplied that number by one hundred for their current bike, the Silver Lightning. 1,200 kW of power (1,630 hp) is a lot for any type of vehicle, let alone something on two wheels with a tendency to turn that into just one under heavy acceleration.

The Silver Lightning looks just like what you would expect from a drag racing motorcycle: heavy on functionality, light on design. The angled silver surfaces have a certain Tesla Cybertruck vibe about them, but unlike the electric pickup truck, this thing was built for speed and speed alone.

The venue chosen by the True Brothers was the "NOT the Euro Finals" held at the Santa Pod Raceway in England in September. The organizers allowed the team nine runs to try and beat the then-standing record of 6.94 seconds set in 2012 by Larry McBride, and with two-thirds of them already gone, things weren't looking great for the Danish cousins.

After six attempts, their best time was a perfectly respectable - but ultimately insufficient - 7.15 seconds. Lucky number seven was up and, even though the team was allowed two more runs after that, there were probably plenty of nerves in the air by that time. After all, this was the culmination of 12 years of work.

Riding the bike was Hans-Henrik Thomsen, a man whose skill is only matched by his braveness. And his physical fitness, apparently, because accelerating at the rate the Silver Lightning is capable of is certainly demanding on the body, particularly when you're trying to keep the damn thing going straight at the same time. Not to mention setting a new world record.

With the record in the bag and two more passes to go, the team made a few modifications - upped the power, lowered the tire pressure - in an attempt to improve the time. And they did, albeit by just one-thousandth of a second (7.86). The trap speed, however, was considerably higher at 195.4 mph (314.4 km/h). You can watch the True Cousins' world record run below. 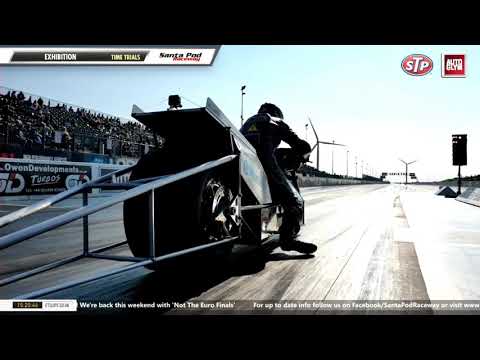