1 Forget about Lexus, We Found the Real Doc and His Hoverboard – Video

2 What If Back To The Future Time Machine Was a Modified Lamborghini Countach?

4 Lexus Announces the Official Release Date of the Hoverboard

Doc Brown and the Time Machine Return in New Teaser, But It’s Not What We Hoped For

Home > News > U-turn
Ionut Ungureanu
Back to the Future is just an incredible franchise we can’t forget. It managed to turn a rather regular vehicle - DeLorean DMC-12 - into a superstar and created the hope that humans will someday be able to get back and fix things. A fourth installment of the film has been discussed many times, but this new video with Doc, unfortunately, has nothing to do with that.
1 photo
The director and co-writer of the three-film comic science fiction franchise has clearly stated there will never be a fourth installment. “There’s no Back To The Future IV, and there shouldn’t be a Back To The Future IV,” said Robert Zemeckis a while ago. “I don’t think there should ever be a fourth sequel to anything. Three is a dramatic number. It’s a three-act structure. Four is even. Four is boring."

So why are we seeing Christopher Lloyd back as Doc Brown holding a remote control right next to the famed time machine? Because of clever marketing, that’s why. Universal Pictures Home Entertainment has released this teaser to promote their upcoming 30th Anniversary Blu-ray set for the Back to the Future trilogy.

The teaser sets up a brand-new shortcoming exclusively to the release titled “Doc Brown Saves the World.” Just in case you feel like traveling back to the future from the comfort of your couch once more, you should know you can pre-order your own copy of the October 20 release. According to Coming Soon, the new box set includes: 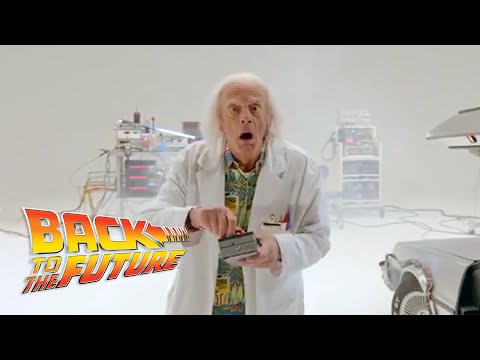