5 The Model S Yoke Is Here to Stay Because Musk Likes It and He Knows Best
Car video reviews:
Up Next

After Learning How to Ride a Bike, Nicholas Hoult Takes Up Ferrari Racing Course

Tesla's Yoke has caused quite a stir ever since it was first shown, and it is still a hot topic among car enthusiasts. With that in mind, the Brits at Carwow decided to show us what would happen to a normal car if it received a DIY yoke.
7 photos

Mat Watson plays his part in the whole thing and first attempts to turn a Mercedes-Benz S320's steering wheel into a yoke. With that in mind, please do not attempt to modify the steering wheel of your vehicle while it is still fitted to the steering column.

Through several attempts to chop off the top half of the steering wheel, Mat Watson shows how sturdy the unit can be. It would have been cut eventually, but doing so while the steering wheel was still fitted to the vehicle would have brought inevitable damage to the interior of the S-Class in question.

Instead, the production team handled the situation in the correct manner and performed the “conversion” with the wheel outside the vehicle. While it is obvious, we insist on mentioning the fact that we do not recommend chopping the steering wheel of your vehicle to get it to look like Tesla's yoke.

The test involves getting the S-Class through various challenges to see how it works with the “new” steering wheel. Since the vehicle was not meant to have a yoke, but a steering wheel, it is easy to guess where this is going.

At the end of the day, we get a laugh out of the entire test, and it is reasonable to assume that you might have the same experience out of it. Just remember that this is meant for entertainment purposes, and it is not a step-by-step guide to turning a steering wheel into a yoke, and everything will be fine. 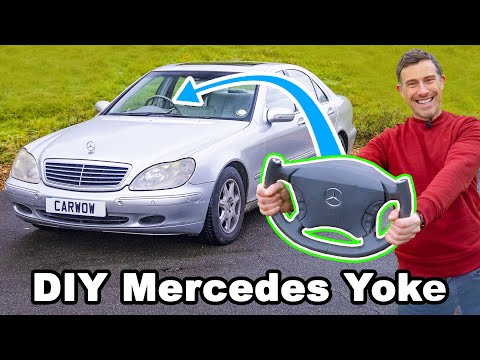