By now, we all know that Tesla’s highly advertised Model S Plaid comes with a controversial yoke-inspired steering wheel. While it seems like a cool feature, using it daily proves that its design is far from perfec. For some, it may lead to spending a lot of money on anger management therapy.
13 photos

Released in June, the new Model S Plaid offers the longest range and fastest acceleration of any Tesla to date. It also gets a refreshed interior at the heart of which we find a radically redesigned steering wheel that looks more like an airplane yoke. Many have raved about how innovative it is, and some even went as far as praising the carmaker for reinventing the (steering) wheel.

Similar designs have been employed in motorsport, where it offers several advantages like more room for the driver’s legs and increased visibility. Also, a little German vehicle called Messerschmitt KR200 used a yoke-style steering bar way back in the mid-1950s, so it’s not quite a design that reinvents anything but rather raises some valid usability questions.

Although it was speculated that the National Highway Traffic Safety Administration (NHTSA) would not approve it for road use, the thing eventually made its way to the market, and many early owners had a few issues with it.

It’s difficult to use during complex maneuvers
There’s a valid reason why other manufacturers have stuck with the classic round shape for their production vehicles, and it has to do with complex maneuvers such as parking or navigating through tight corners.

While parking can be easy thanks to the car’s assists, the yoke becomes extremely awkward to handle on a normal drive through the city. As the video bellow from OCDetailing shows, the steering ratio isn't quick enough so the driver has to rotate the yoke more than 180 degrees, struggling to grip it.

We’re creatures of habit, and some of us have been using traditional steering wheels daily, for decades. The switch to this rectangular version is so dramatic that it will require a lot of time and patience to get used to.Multifunction switches have been replaced with touch buttons
Another drastic change is removing the classic lever switches that control the turn signals or wiper washer system, which have been replaced with capacitive touch buttons located on the two horizontal spokes.

They are placed within reach of your thumbs, so there are no issues with ergonomics. Yet, since the vast majority of cars use multifunction switches mounted behind the steering wheel, drivers will be tempted to take their eyes off the road to locate the buttons before they get used to them, something that can be extremely dangerous.

The horn has been relocated too
You would think that at least the horn is still in the middle of the wheel, but Tesla designers seem to have made an effort to confuse the heck out of drivers, so they relocated this function to the right spoke as well. Again, you’ll be tempted to look at the yoke before using the new touch button, and even worse, if you need to use the horn while navigating a tight corner, the button will be located on the left side, only adding to the confusion. You can’t buy a Model S Plaid with a normal steering wheel (yet)
The worst part about the new yoke is that you can’t get a Model S Plaid that’s fitted with a normal steering wheel even if you want to. While initial reports stated that one would be available as an option, Tesla seems hellbent on forcing its customers to use the controversial yoke. However, the company doesn’t currently offer an alternative, which is extremely disappointing, to say the least.

While the new yoke looks undeniably awesome and should be nice to use on the highway, it will require some time getting used to while driving through the city. Elon Musk stated that it shouldn’t take more than a couple of days, but if we’re honest, it will take weeks, if not months, of daily driving for the normal person to feel comfortable using it.

The bottom line is that those who want to buy a new car that is by no means cheap won’t appreciate being forced basically to learn how to drive again, but Tesla doesn't seem to care about what their customers think, so the yoke is here to stay. 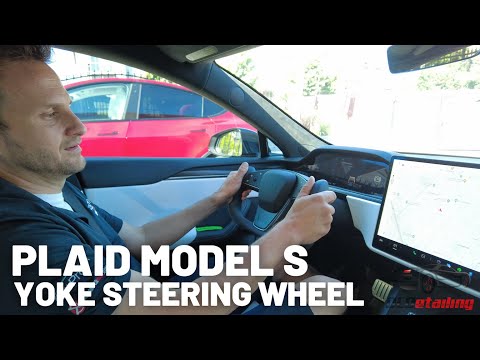