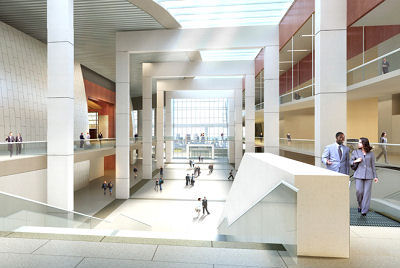 We have some really good news for the Motor City, as the Detroit Regional Convention Facility Authority announced a US$221 million renovation of the Cobo Conference and Exhibition Center. As you probably already know, this is the location where the annual North American International Auto Show (NAIAS) takes place.

The center last received a makeover more than 20 years ago, in 1989, but under a three-year plan it will undergo a substantial facelift, both inside and out, in the hopes of making it even more attractive. Thankfully, construction is already underway on the $221 million development, but while many of the renovations will be ready for the 2012 and 2013 NAIAS, all improvements will only be completed for the 2014 show.

During the recent press conference, the Cobo Authority launched a virtual tour of the conceptualized convention facility in its complete form. The venue will grow in size and will also have a three-story atrium. One of the most striking changes is the giant high-tech digital video screen on a revamped east exterior side of the facility, which is also included in the plan.

"For more than 24 years, the NAIAS has been the vehicle to drive sales and educate consumers and decision makers on a global scale with automakers’ brand messages, while it continues to be a reliable gauge of the worldwide economy,” said NAIAS 2012 Chairman Bill Perkins.

“All of these functions will now be amplified through an amazing transformation of a classic facility that will enhance the image and legacy of the NAIAS. We're building on a strong, positive momentum from NAIAS 2011, and we're encouraged by what we're hearing from automakers. The industry is rebounding, and the news about the Cobo improvements comes at a critical time," he added.