Rusty and Rugged on the Outside, this Vintage Boxcar Is a Lovely Home on the Inside

Otilia Drăgan
Is “sailboatlife” becoming just as popular as vanlife? When the pandemic broke out, many folks were inspired to follow their dreams and make a drastic change in their lifestyle, ditching conventional living situations for more freedom. Individuals of couples, young or old, many decided that a sailboat would become their new traveling home.
11 photos

Unlike some younger couples that opt for a house on wheels mainly because conventional housing is so expensive, this couple already owned both a house and an RV. But 43-year-old Tamara and 50-year-old Josh wanted to live their dream life, which was cruising around the world in their own sailboat.

So, they sold both their house in British Columbia, Canada, and the 1999 Itasca Sunrise SE which they claim was “in incredible shape for its age” and bought a boat.

The vessel that would become “our home, our vehicle, our office, our spaceship” is not a new and shiny boat, but an American, rugged one from 2001. Even the buying process was a challenge, the couple told Coast Reporter, as the boat was owned by someone in Australia, but docked somewhere in the U.S., while they were in Canada. But it all worked out and now the sailboat named Honu Time is proudly sitting in Chesapeake Bay.

Unlike other sailing couples we’ve talked about before, Tamara and Josh are still at the beginning of their sailing adventure. After a three-month refurbishing process prior to moving it to Chesapeake Bay, they are currently refitting Honu Time and doing it on a tight budget. If things go well, by Christmas they plan to head to Georgia, followed by a trip to the Bahamas, which sounds exciting.

Hunter 460 boats are no longer in production, and the original manufacturer, Hunter Marine in the U.S., is now called Marlow-Hunter. The 46-foot (14.5 meters) boasts a Yanmar 76 HP engine that allows it to cruise at 8 knots (9 mph/14.8 kph), and includes three bedrooms, two bathrooms, and a well-equipped galley.

A manufacturer’s catalog at the time of its build emphasized the boat’s spacious layout, with the master room as big as those of a yacht twice its size, and an inviting open salon. Although it still needs more work to become a permanent home at sea, Honu Time seems to have a good DNA. 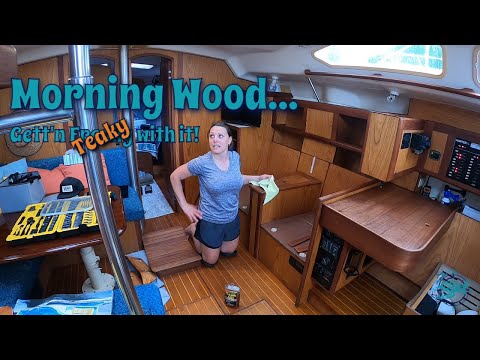