Daniel Patrascu
Call me a sucker for alternative history everything, because that’s what I am. I simply love stuff like Philip K. Dick’s The Man in the High Castle (but also Frank Spotnitz’s TV series by the same name), or Ronald D. Moore’s For All Mankind, and even Disney’s What If…, although, granted, this one is not actually alternative real history.
6 photos

For All Mankind (three seasons ended, at least one more on the way) is of particular interest to us today, not because this is what this story is about, but because it’s somewhat related. In the Apple-ran series, we’re faced with an alternate reality where Soviet Russia landed cosmonauts on the Moon before America, and the Cold War-era space race never ended.

It’s something similar we’re faced with here, in the latest video from our favorite space exploration animation specialist, Hazegrayart. We get to see how a piece of hardware marked CCCP launches from here on Earth, travels the dark and empty distance that separates the Moon from our planet, and lands up there to unload various comrades.

What we get to see the most in this video is the LK lunar lander, an idea that popped into Soviet heads in the 1960s, but never came to be. Supposed to work just like America’s Apollo, the LK did fly, sent to Earth orbit during three separate test runs, but never got to perform the role it was meant for.

And it wasn’t its fault either, but that of its launch vehicle, the N1. The Russians didn’t manage to get the thing off the ground properly in time, and Americans beat them to it, landing our first people up there on July 20, 1969.

As a result, Russia pulled the plug on its Moon landing program, and that’s how we got the reality we live in. 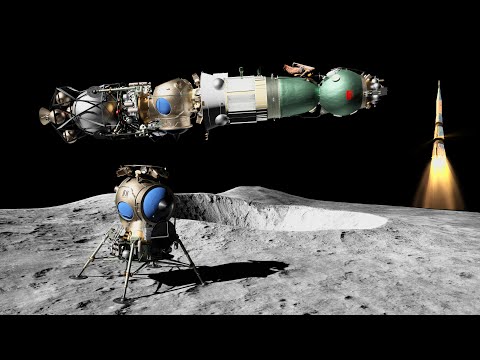