5 BMW 328 Hommage Captured in Motion
Car video reviews:
Up Next

The Bugatti La Voiture Noire isn't worth its weight in gold like a classic Ferrari we know. But it holds the record for the most expensive new car, and it just rolled into Villa d'Este 2019 under its own power. Exciting!
3 photos

The internet puts it as high as $19 million, but even if it "only" costs $18m, you can still buy the LaFerrari, Porsche 918 and every modern Lamborghini rarity with that kind of cash. And it's a cool-looking thing too. Some of the other expensive new supercars have been understated or downright weird, like the Lambo Egoista. But this looks like a much more expensive version of the Chiron... which it basically is.

Bugatti is celebrating its 110th anniversary this year, but also the 110th birthday of Jean Bugatti, Ettore's oldest son. Seen as the finest car of its era, the Bugatti 57 was his baby, and it was known as La Voiture Noire. Hence the reboot.

Thankfully, the designers weren't restrained by nostalgia or classic car lines. So the outcome is one of the most futuristic machines ever put together, with a swoop or air intake wherever you look.

This piece of automotive haute couture is drenched in custom elements that belong to no other model. However, beneath all that carbon there still beats a quad-turbo W16 8.0-liter engine with 1,500 horsepower and 1,600 Newton-meters (1,180 pound-feet) of torque, the same as in the Chiron or Divo.

To make it instantly recognizable as a Bugatti, they kept the horseshoe design for the main grille. However, the C-shape on the side now starts at the front, not the A-pillar for a lengthier look. The crease down the center of the car is also more recognizable, even splitting the windshield.

Do you like exhausts? Because this thing has more of them than pretty much any modern machine. And you're about to listen to all six tips in several supercar spotting videos from the Concours event. 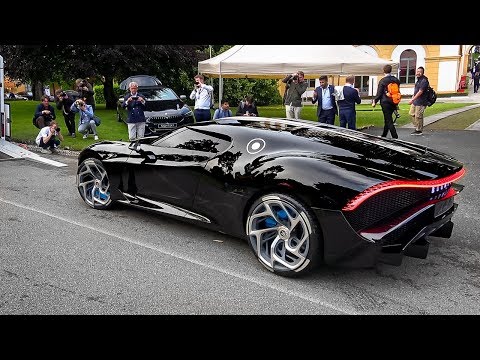