Bugatti introduced another masterpiece of a hypercar in 2022 and offered a multi-million-dollar vehicle for those who could handle the power of a quad-turbocharged W16 engine.

The French brand was already in the same boat with the Croatian manufacturer Rimac when it revealed the Mistral. It was unveiled by the company's new CEO, Mate Rimac, who created the most powerful and quickest electric car in the world, the Nevera. He even announced that the Mistral would be the last W16 Bugatti.

The Croatian CEO brought fresh ideas when he took over the Bugatti's helm. Thus, he understood that the brand needed a new, astonishing design, leading to the open-top Mistral. With its unique-looking LED headlights and the sculptured front end, the hypercar still featured the horseshoe-shaped center grille flanked by wide air-intakes that cooled the front brakes and helped the car's aerodynamic. From its profile, the Mistral featured a raked windshield and narrowed down side windows. Behind the cabin, the automaker created a taller structure that concealed the safety arches and the engine's air intake. At the back, the taillights looked like two arrows pointing towards the car's center.

Inside, the leather-clad cabin featured two seats separated by a tall center console and a sloped center stack. In addition, carbon-fiber elements decorated the interior and the door cards. The sports seats featured cutouts for a race harness, even though the car was mostly designed for street use, not for racing. Even though it could race faster than most of the cars on the planet.

Behind the cockpit, Bugatti installed its famous W16, a quad-turbocharged powerplant that was carried over from the Chiron. Its immense power and torque were sent in all corners of the car via a seven-speed automatic transmission. 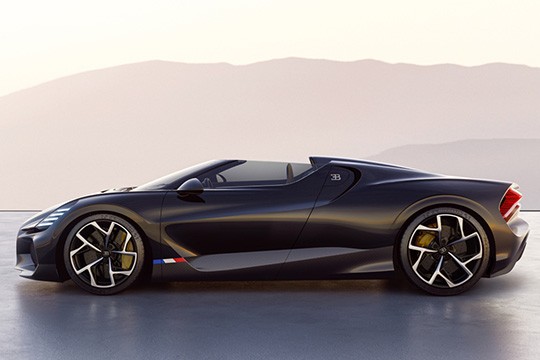