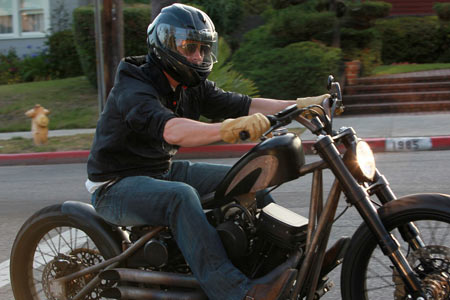 This is not the first time that the Hollywood megastar is spotted enjoying a ride with his custom-built motorcycle on the streets of L.A., though we would have expected to see him on a different bike by now.

However, in most cases Brad Pitt is seen wearing only the helmet and the gloves, which are only a small part of the recommended riding gear.

Compared to the last time the paparazzi caught him cruising on the bike, the only thing that changed is the helmet’s type. If in January the actor was wearing a golden half helmet, this time he went for a black full face protection and sunglasses.

We’ve got so used to see Pitt and Jolie together we cannot help wondering how come he is riding alone, again. 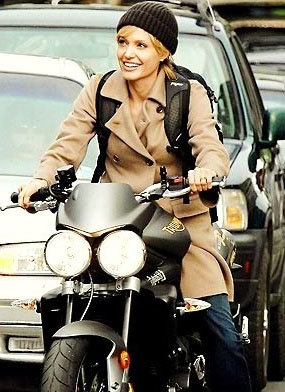 The fact that the bike is not having a designated passenger place is not an excuse, since Angelina could have joined him on a different bike.

It was only last month that Jolie was snapped filming a motorcycle chase scene for her upcoming movie ‘Salt’ on the streets of New York City.

Jolie was expanding her on-screen rides, adding the Triumph Speed Triple from this latest movie to the list of Yamaha TRX80 and a CCM 604, both featured in Tomb Raider films.

The movie, 'Salt' which is scheduled for release in 2010 also stars Liev Schreiber who has in own motorcycle connections, as clutchandchrome.com reported.

In the real life, Angelina not only bought Brad a nice selection of motorcycles, but she has also been spotted joining him on the road with her own BMW bike.

The most recent two-wheeled purchase Jolie made for her biker-husband was a Ducati Monster 1100S titanium for his 45th birthday last December.