Brad Pitt Has a Thing for Valentino Rossi 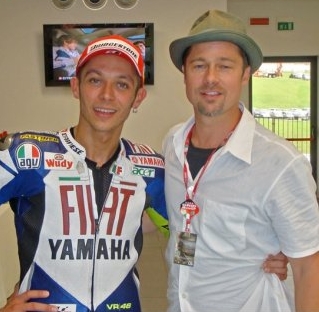 Don't worry Brangelina fans, it's not like that, Brad only has the highest respect for Valentino Rossi and his motorcycle skills. In a recent interview with the “Riders Italian Magazine” he expressed his admiration towards the 2008 MotoGP World Champion Valentino Rossi.

We're willing to lay down good money on the fact that you weren't aware just how much the famous Hollywood reporter, who is a superstar in his own right, is in awe of the man they call “The Doctor” for his surgical precision around the track.

His admiration for Rossi extends even off the track, for his success and also “his great spontaneity, which he maintains despite his incredible popularity”. In case you didn't know, Brad is also quite the moto enthusiast and has been spotted numerous times riding around town on several models, even with Angelina wrapped around his waist.

“He is always cool, he seems to have a calmness which is almost beyond human” went on Pitt to praise Rossi. “He can do the impossible. He looks like he weighs 30 kilos and yet he is able to stick to the asphalt without crashing. He looks like he is dancing when he rides, it is pure poetry”.

Pitt is so familiar with Rossi's style because he is a common figure in the stands of any MotoGP race. This year, he witnessed Valentino's win at Mugello and even went down to his pit-box to congratulate him.

“We are both in the public eye and it rare for us to have big heroes, but I have one who I put above everyone else, Valentino Rossi. I would give anything to be like him”. It's pretty safe to assume that Rossi would also like to be like Brad, be married to Angelina and be adored by millions of women around the world.