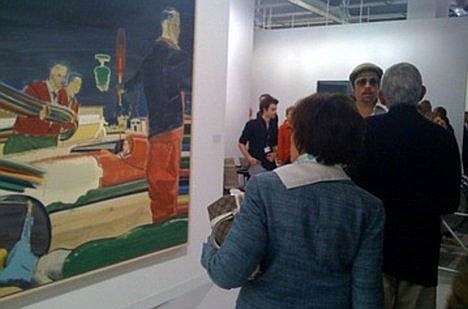 Though prices on the art market have dropped 34 percent this year, there are still people with sense of the art, willing to pay for an artwork its rightful price. Brad Pitt is one of them, as the actor recently bought a Neo Rauch painting priced at $956,000.

Brad Pitt was not the only VIP who was present at the Art Basel exhibition in Switzerland. Model Naomi Campbell, Russian billionaire Roman Abramovich, Karl Lagerfeld, American billionaire Stephen Schwarzman and art collectors Eli Broad and Howard Rachofsky were also spotted at the event.

We don’t know how to qualify Pitt’s failure in taking off his aviator style sunglasses, but it seemed no problem for him as he had not only viewed the artworks, but was also one of the Art Basel purchasers, as we previously mentioned.

According to bornrich.org, the 1998 Neo Rauch racetrack painting that Pitt bought depicts a swirling view of a driving behind a red, Formula One-style race car, surrounded by workers carrying different colored hoses. 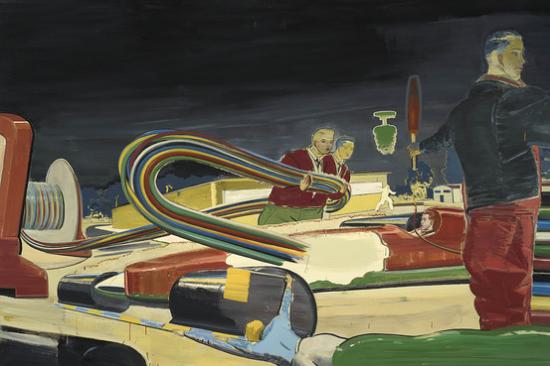 Witnesses say that Angelina Jolie’s future to be husband first hesitated, as he was seen rubbing his goatee, fiddling with his tweed driving cap, and then walking away. After a few minutes of talk with his art collector friends, Eli and Edythe Broad, Pitt returned ready to close the deal.

The Hollywood star finally bought only the Etappe painting, though he was also seen admiring for several minutes many other artworks, such as the $2 million diamond-encrusted sculpture by Takashi Murakami.

The sculpture was made in collaboration with the American record producer and designer Pharrell Williams. Titled ‘The Simple Things’, the sculpture took two years to make, and was finally bought by two collectors, who will share it.