British Prime Minister Boris Johnson was involved in a minor fender-bender on June 17, when a single protester ran in front of his car convoy, blocking the way.
9 photos

Videos from various angles of the incident have emerged online, and you will find three of them at the bottom of the page. CNN has confirmation that this was, indeed, Johnson’s Jaguar XJ and that he was inside the vehicle at the time. However, says a spokesperson, the PM wasn’t hurt.

The incident happened just outside the Houses of Parliament in Westminster, as the PM was making his way to Downing Street. A man ran in front of the convoy and the move was so unexpected that the police motorcycle in front had to brake suddenly to avoid running into him. The Jag was second, followed by a security car and another police car. As all vehicles braked, the Range Rover rear-ended the Jaguar.

When the convoy left, it became apparent that there was a considerably-sized dent in the back of the PM’s car, which carries an estimated value of £54,000 (approximately $68,000).

As per the same media outlet, the protester was Kurdish and was demonstrating against Turkey’s operation against Kurdish rebels in northern Iraq. He was pinned down by another cop and was eventually taken into the Palace of Westminster for questioning.

“A man, no further details at this time, was arrested at the scene for offenses under Section 5 of the Public Order Act and for obstructing the highway. All vehicles were able to drive from the scene,” the same statement notes. 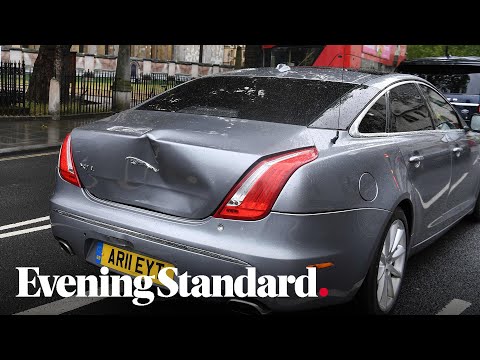