1 Marco Wittmann Claims Fourth Win this Season on the Ring

2 Marco Wittmann Will Start from Pole Position on the Nurburgring

BMW at 2014 Legends of the Autobahn

1 photo
The Legends of the Autobahn event is getting more and more attention every year, with big manufacturers like BMW looking into it. This year, the German manufacturer sent an impressive contingent at the event, as part of the Monterey Sports Car Weekend.
Starting out just in 2011 with a bang thanks to the world debut of the BMW 328 Hommage Concept, the event has now gained international recognition. It was there where we also saw the BMW Zagato Z4 Roadster concept for the first time in 2012.
This year, BMW came prepared. They brought out the big guns including the BMW.Williams FW22 F1 car with which Ralf Schumacher finished fifth in the 2000 Formula 1 championship, the BMW V12 LMR prototype and the No. 2 BMW M1 IMSA Group 4 car. The last two were even driven to the event to entice the audience.
Other rare cars shown on the BMW stand were the BMW 30th Anniversary M5 model, the Number 25 BMW 3.0 CSL car that won the Sebring endurance race back in 1999 and the so-called BMW M5 Supercar.
The latter used to defeat the likes of Porsche, Ferrari and Lotus back in 1994 and 1995 thank to its unique engine and layout. The inline 6-cylinder engine under the bonnet was tuned to 450 HP and it used to tear up asphalt. Just imagine a full-size sedan taking down veritable sportcars on the track. It really was something.
BMW even used it for marketing purposes with lines like “the 1994 IMSA Supercar Champion has something exotic Ferrari, Lotus, and Porsche competitors don’t. Four doors. Of course, come to think of it, the BMW M5 Sedan also has the trophy.”
All of them and a short interview with one of the participants can be seen in the video below posted by BMW on their official Youtube channel. 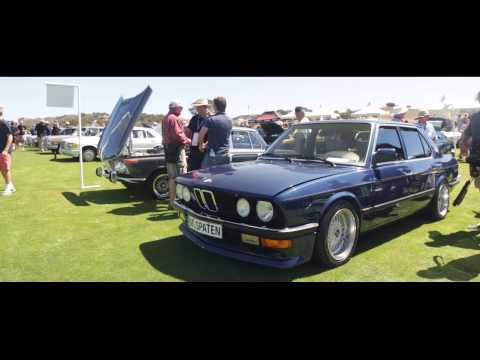