3 Here’s a Flying Coach Potato: Paraglider Takes Off With His Sofa, Chips, TV

5 2 Russian BMD-2 Armored Vehicles Fall Out of the Sky During Drill
Car video reviews:
Up Next

Younger kids say that being a Harry Potter fan is such a millennial thing to do, so here’s one for all those millennials out there: the closest thing to a real-life Quiddich game happened in the Swiss Alps a few days ago.
5 photos

File this under insane and awesome aerial stunts with a healthy dash of humor: a group of BASE jumpers who also happen to be big-time Harry Potter fans did their best to recreate in real-life the fictitious Quiddich game. For those of you who don’t know, it involves two teams of players riding on brooms, trying to catch a little flying ball called Golden Snitch.

Because we don’t live in the imaginary world of author J.K. Rowling, Quiddich is just a pipe dream for the rest of the world, even if you do go all out, like by investing in something called the Real Flying Broom (hint: it’s not a real broom, and it doesn’t really fly). But for Antony Newton, it became reality.

Antony is a BASE jumper and slackliner from Lorraine in France and, some days ago, he and his friends celebrated their 500th jump in the Swiss Alps. Having watched the Harry Potter films just shortly before, they decided to make their own brooms right before the jump, so they were able to experience what the teen wizard and his friends must’ve felt during the Quiddich games.

The jump was captured on camera and is available in the video below. The jumpers even remembered to say the magic words (“Wingardium Leviosa,” a.k.a. the levitation charm) before jumping, so this tells you how big a fan they are.

“We built the broomsticks with surrounding branches and jumped together off the cliff. This stunt was prepared and briefed. We have years of experience,” Antony tells SWNS, presumably to warn others against attempting the jump without proper experience and preparation.

In all seriousness, this is just amazing content, broom, or no broom. But it does add to the novelty factor that they probably became the only people in the world to have experienced a real-life Quiddich game. Even without the Snitch. 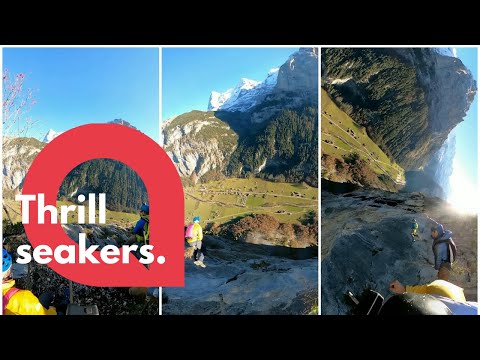