1 Are Synthetic Fuels the Future of Internal Combustion and an Alternative to EVs?

5 Audi RS6 and Dodge Magnum Line up Their Large Tailgates With Camaro and Mustang
Car video reviews:
Up Next

You can be sure of two things in life: one is that too much sugar is bad for you, and the other is that consensus over which manufacturer makes the best all-wheel-drive system will never be reached.
6 photos

Ask a Subaru owner, and they'll say that nothing beats the Symmetrical All-Wheel-Drive used by the Japanese carmaker. A BMW owner, on the other hand, will make a case for their xDrive, while the 4MATIC and 4MOTION will also be defended by Mercedes-Benz and Volkswagen owners, respectively.

None, however, are likely to be more vocal than the loud choir of Audi owners who simply know that quattro is better than all of them. Even "combined", some will probably say, just to add more emphasis, even though it makes no sense.

For some reason (we'll get back to that later), the idea that Audi makes the best AWD has really caught on, and you can bet your last cent the fanbase of the Ingolstadt brand is not going to let it die out. But is there any truth to it? Well, we can sit here and debate based on subjective arguments, or we can let the slip test do the talking.

In short, it's pretty damn good, though it does need a little fiddling with the car's settings to get it unstuck when only one front wheel has traction. However, no matter how many buttons you push and in what order, there is nothing the quattro can do to get the car moving when only one rear wheel is left touching the ground. That seems to be the system's limit, at least as far as the A6 allroad quattro with the 3.0-liter turbocharged V6 is concerned.

Strangely enough, a similar test conducted by a Polish channel using an EU-spec Audi A6 allroad quattro with the 3.0-liter TDI turbodiesel V6 managed to pass that test too, even without engaging the "off-road mode". Granted, it took a lot of convincing (read "throttle"), but it got the job done in the end. It looks like TFL's Tommy didn't give it enough gas, and considering one of the rollers was already smoking, maybe it's better he didn't. The team sure needs a new (and better) set of rollers. Well, we know what Tommy is getting for Christmas.

So, is Audi's quattro AWD system good? It sure is. Is it the best, though? After watching this, you can't possibly claim that it is. Yes, it revolutionized the world of rallying when it was first introduced, and that's probably half the reason why people still hold it in such high regard. That said, calling it "the best" is really pushing it. Throw a "one of" in front and then we're talking. 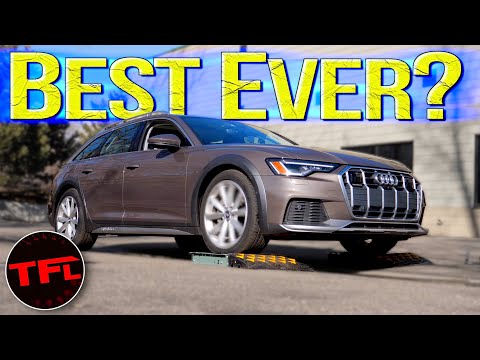