1 Last Ever Audi Ur-Quattro Becomes World’s Most Expensive at $230,000

3 40 Years of Quattro: A Short History of the Legendary All-Wheel-Drive System

After Six Months in Space, Crew-3 Astronauts Are Finally Back Home

Home > News > U-turn
Sebastian Toma
Audi had an entirely different design language back in the 1980s, and we cannot say it has not aged well. Some of the models that the Ingolstadt brand released back then became classics, and some of those ended up changing the world, like the Audi Quattro did for rallying, and not just for that.
10 photos

Now, everyone wants an Audi Ur-Quattro these days or claims to want one at least until they see the price. Once that happens, it becomes a no-go, as the original Quattros were made in limited numbers, and it is hard to find one these days. The same goes for the rally cars, which are even harder to find.

This week's detail from Larry Kosilla's workshop features an Audi Coupe B2, which the company called Type 81 back then. While it looks a bit like the company's Audi Quattro rally car, it is actually its front-wheel-drive sibling. It does have a variant that was offered with all-wheel drive, with the internal reference of Type 85, but this example is not one of those.

Instead, the Audi Coupe that you see below is a front-wheel-drive car with a longitudinally mounted engine. That does lead to more understeer than anyone would like, but only if you want to drive it in a sporty manner. The tendency did not change with the Quattro model, which was developed on the basis of a variant of this model, but that is a different story.

This example has not been washed in at least seven years, and it was previously stored with the windows open. As a pro tip, it is ideal for storing a vehicle with all its windows up, as well as its doors closed, if you must store it. Even in a locked garage, it will gather dust, and small critters might get inside and ruin it. You have been warned, but you can check the damage suffered by this classic Audi if you still have doubts.

In this video, Larry also breaks down some science about automotive paint, as well as explains why some things can be fixed with a detailing procedure and some cannot. It does come down to the skill of the detailer, though, so keep that in mind before asking for a quote. However, if several specialists say that it cannot be done, there is a good chance that it is true. 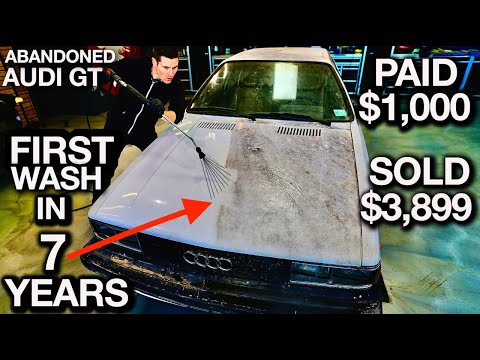