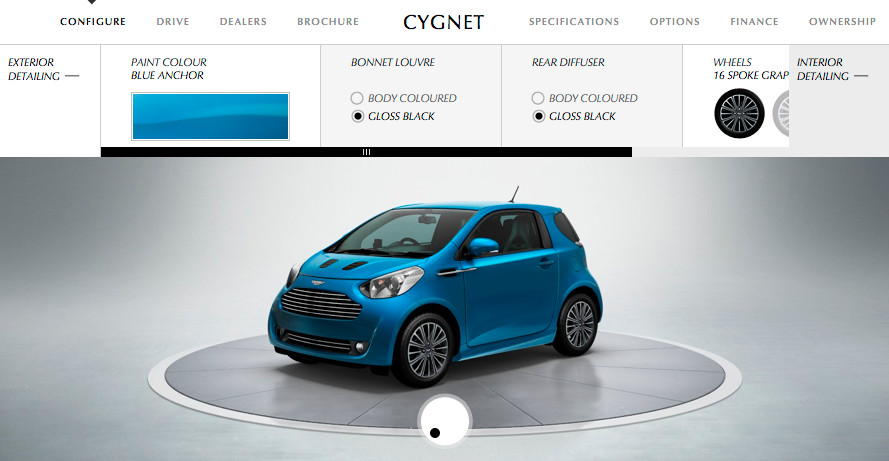 Aston Martin has just launched the online cofigurator for the brand new Toyota iQ-based Cygnet. Given the high price tag of the little fortwo-rival, the famous British firm had to pull out something amazing with this one, and they did.

There’s all sorts of exterior paint schemes available, from the almost hilarious to the totally delightful. There’s also four 16-inch sets of wheels to choose from but if you want to roll to a fashion event or a gala opening in something bigger or more ostentatious then that, you’ll have to turn to the aftermarket.

You can choose to have Aston’s version of go-faster stripes - those air vents on the bonnet - painted in either the same color as the body or gloss black to make them stand out more.

The little citycar is heavily based on the Toyota iQ, but Aston say the Cygnet will be hand-assembled at their factory at Gaydon in Warwickshire, England, alongside the company's Grand Tourers.

"It is time to think differently. Aston Martin is honest and we don't make compromises. Whatever we do, we do right. If we do performance, we do performance; we don't downsize or compromise our sports cars. The Cygnet needs to satisfy the demands of emissions and space. It is a car without compromise, just like every other Aston Martin. Our customers need a small car for urban and city use, and they want the right tools for the right job, to downsize creatively without compromising intelligence, artistry and personality," stated Aston Martin CEO Dr Ulrich Bez.