1 Audi e-tron GT Concept Is a Blurry Spec in Video Teaser Ahead of L.A. Debut

5 Cupra to Launch 7 Models by 2021, SUV Coupe Could Be called Terramar
Coverstory

Mihnea Radu
German automakers are focusing on SUVs and electric cars, but customers back at home still love big wagons with powerful diesel engines. They make great family cars, and the ones from reputable brands offer real luxury, like in the case brand new Audi A6 Avant.
1 photo
We could say that the A6 Avant is the segment benchmark because it's more famous than its rivals. But in we can't ignore the Mercedes E-Class T-Model, particularly due to its space and badge.

Auto Bild did a quick comparison of the two, based on the demands of an average customer, and they start by pointing out that the sexy coupe-like roof of the Avant may affect space a little too much. The Benz has a bigger trunk with perfectly flat folding seats while the Audi's are angled at 15 degrees. Still, the A6 is more versatile with dividers and hooks. Still, both brands are sick with the fake exhaust disease, even though we prefer the angular look of the Audi.

Not satisfied with just looking at the official specs, the reviewers tell us that they've tested the E 220 d T from 0 to 100 km/h in 8 seconds. This 194 horsepower, 400 Nm 2-liter turbo engine drinks up 6.8 liters of fuel in the real world.

Audi meanwhile has switched to a mild hybrid system which in the case of the A6 40 TDI means a 12-volt setup around a 2.0 TDI with 204 HP and 400 Nm. Despite more power, it's been tested to be slower at 8.5 seconds to 100km/h, plus it's a little thirstier overall. How is that even possible? Weird is to blame.

The E-Class steering is more direct because it's RWD, while its air suspension irons out the bumps perfectly, allowing you to travel 1000km in one sitting. However, the large infotainment screen which is a 3,000 euro extra doesn't have touch. 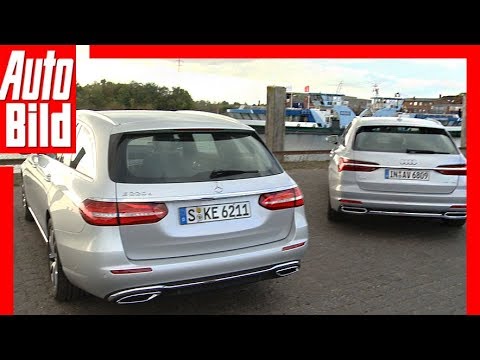