Toyota GT86 Versus the new Mazda MX-5 on the Track: What's Your Choice? – Video

Not long ago we asked you when it is fair to pit a tuned car against a stock one and nobody was too eager to offer an answer. Well, this time we’re back with the same question but with different cars going at it against each other.
1 photo
What we’re dealing with today are two proper supercars and an ultra-fast GT car that goes by the name BMW M6. How is it possible to pit an M6 against two supercars? Well, as we said, tuning is the answer to this question.

To be more precise, the Bimmer was taken from 560 HP, which is what the 4.4-liter V8 twin-turbo mill makes in standard guise, to over 800 HP thanks to a Stage 2 tune. That means that alongside a new ECU map, the car also received extra cooling, a new intake and exhaust. It’s still a massive rear-wheel drive car we’re looking at here and that will make a difference in the end.

On the other side of the drag strip, we have two cars that are considered supercars in every corner of the world. The first one to go up against the Bavarian muscle is the new Lamborghini Huracan LP610-4.

As the name suggests, the Raging Bull, in its standard guise, has a 5.2-liter V10 engine to play with, making 610 HP and 560 Nm (413 lb-ft) of torque. Hooked up to an all-wheel drive transmission and an ultra-fast 7-speed gearbox, the Lambo accelerates to 100 km/h (62 mph) in 3.2 seconds. It’s good to keep in mind that this car uses an improved version of the unit fitted on the Audi R8 also featured here.
Therefore, the Huracan has 190 HP less but some 400 kilos (880 lbs) to its advantage as well as AWD that helps put its 610 HP to the ground a lot more efficiently. 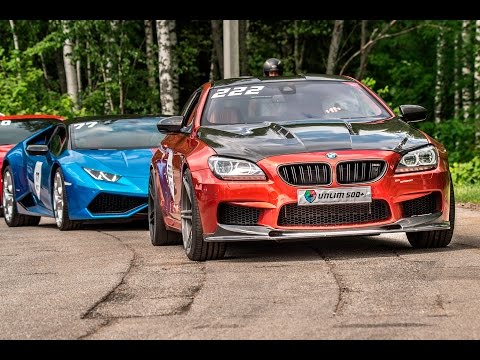