1 AC Working On Continuation Series Cobra, 9 Units In the Offing

Vlad Mitrache
The Mustang struggled to stir the same kind of emotions the first models managed to, but this second to last generation was pretty good at it. And that's because it wasn't a perfect car, but it had plenty of character.
8 photos

But even though there are powerful Ford Mustang versions as well, none will even begin to compare with the Shelby GT500 SVT. It has 720 horsepower and a set of exhausts that will let the whole planet know it. It's as unapologetic as muscle cars get with absolutely no intention of behaving in a bend, but more than willing to eat asphalt during a drag race.

The muscle monster car was present at a special Supercars Rallye event in Germany, where it took advantage of the airfield track laying in front of it and participated in a few drag races. After smoking a similar (but not identical) Shelby Mustang and a Porsche that actually put on a good fight, the GT500 lines up against its most modest adversary of the day: a Ford Focus ST.

The hot hatch was undoubtedly tuned to the teeth, but unless there was also an engine swap involved, there's only so much you can squeeze out of a two-liter four-cylinder engine. The race, then, was a formality for the Shelby, and yet, like any true champion, it wanted to give its all. However, despite several successful runs and a set of warmed up tires, just a few seconds into the race and it all went wrong.

The rear tires lose grip, the back end goes wide, so the driver tries to correct the trajectory and regain control. But as it so often happens in these cases, he overcorrects it and the Shelby goes violently to the left onto the left side of the track. Luckily, the Focus driver is alert and swerves away avoiding what could have been a very nasty crash. What we find surprising is that it looks as though the Shelby driver panicked and slammed the brakes, something he should have known that it would only make things worse in this situation. Slightly lifting the foot off the accelerator should have done the trick.

In the end, the 720 hp Mustang stops safely on the track, sparred of the humiliation of having to go out on the grass or, even worse, having to leave the event on a flatbed after smashing into its opponent. We don't know if it's just the editing of the film, but it looks like the Shelby only takes part in one more race after that incident, and it loses it. 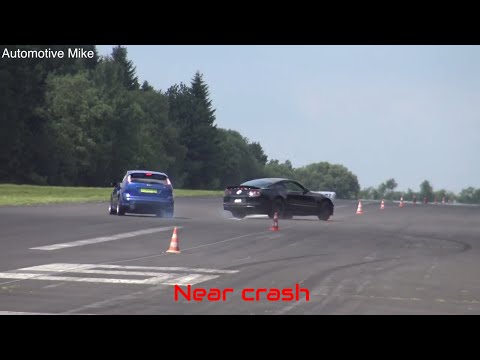