1 Hyundai Retires Elantra GT and Elantra GT N Line in the U.S. for the 2021 MY

5 2021 Hyundai Tucson Comes Alive in Latest Renderings, Might Have N Version
Car video reviews:
Up Next

Modern times seem to have the automotive industry vouching to go fully environmentally conscious at the front and devising more and more crossovers, SUVs, and trucks in the backstage. Some are so new people do not even know their names, others have already reached tradition status. The latter case applies to South Korea’s Hyundai Tucson compact SUV, almost ready to enter its fourth generation.
15 photos

Back in 2004 when the Hyundai Tucson first appeared the compact crossover-SUV sector was much easier to manage with just a few rivals to worry about. In the meantime, the segment came down from its rarefied atmosphere to a fully crowded venue with no room to spare.

As such, standing out in a crowd has become a major challenge for everyone – and Hyundai is seemingly looking for a way out of the conundrum.

As such, according to the latest spy shots and batches of (seemingly) exact renderingss the styling is taking a turn towards a polarizing design. Some may find the futuristic lines quite enticing because of Hyundai’s novel use of lighting technology and edgy cues that bring Lamborghini Urus-like references. Others might just call it a late response to the latest Asian superstar – the Toyota RAV4.

No matter the call, we are pretty sure at this point in time the new paradigm is here to stay at Hyundai. As such, rendering artists have decided to move on to the next point on the agenda – referencing the latest spy shots to an accurate rendering, and then dressing up said CGI with an entire color palette.

This is exactly what YouTube channel AtchaCars did, playing with a bunch of hues – some looking more accurate than others. For example, the contrasting body lines and beefy wheel arches bode well with more natural hues – such as white, black, or gray.

But when the rendering goes toward custom options such as blues and reds it misses the mark quite obviously – notice especially the green shade depiction. We like the yellow one, though, even if it might be there just to rub shoulders with Lambo. 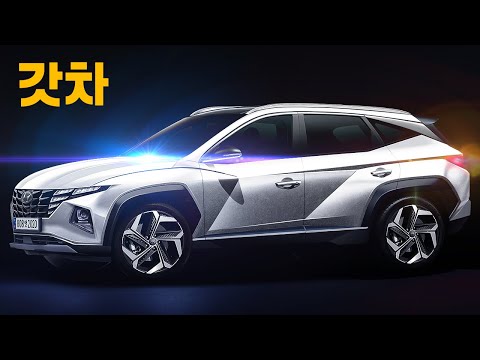