1 All-New Opel Insignia Coming in 2022, Based on Peugeot Platform

Mercedes is undoubtedly the biggest name in luxury cars, making about 170 billion euros per year, almost as much as BMW, Audi and Tesla put together. However, the GLE Coupe still feels like it's trying to catch up.
4 photos

This is a video of the all-new generation, which is probably going to debut within the next couple of months. BMW is credited with inventing the SUV-Coupe hybrid. At first, it was branded an abomination, but now everybody secretly wants one and the fastback roof even truckled down to normal crossovers.

After seeing how much money BMW was making with the X6 and X4, Mercedes developed a model of its own. The GLE Coupe made its debut in 2015, but already felt old. That's because it was based around the old ML-Class to save some money.

This time around, the level of luxury will be off the charts in the GLE Coupe, though we're still not blown away by the looks. This spy video shows the Gen II with its optional AMG Line body kit that gives it a protruding chin and fake but admittedly cool front intakes. It's doing some towing, which usually means powertrain testing.

The model is in the late stages of development and we honestly can't imagine what else they could add. The normal GLE already comes with everything from a four-cylinder to a hybrid V8 that almost no other Mercedes model has. The sweet spot in the range is the inline-6 units, brand new, powerful and acceptably efficient.

Of course, we're going to have a few AMG models as well, both the 435 horsepower GLE 53 Coupe and the 600+ HP GLE 63 S Coupe have been spied extensively.

We believe that the new series will debut either in Frankfurt next month or towards the end of the year in Los Angeles. Sales will start shortly after that, with Mercedes charging about 10% more than the stock SUV. 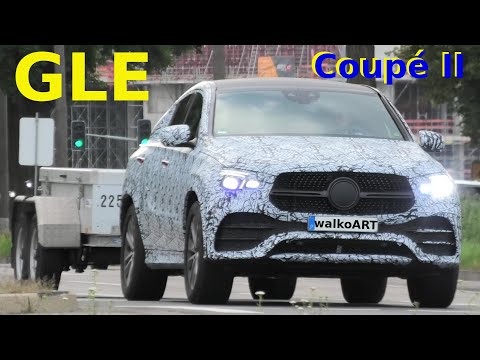