2020 Chevrolet Corvette Vs. Tesla Model Y Performance is a Drag Race It Must Win

Are there still people out there who haven't come to grips with what Chevrolet has done to the new Corvette? There must be, otherwise, where do all the comments you read on every C8 Corvette video come from saying how wonky its proportions are?
8 photos

It's just like we tell our kids whenever they see an ugly person: they're not ugly, they're just different. Except in C8's case, it's genuinely true. There aren't that many mid-engine cars out there that are a sore to look at, so what were the chances that Chevrolet would make one? Well, considering they don't have that much experience, there were some, but they seem to have dodged that bullet, and then some.

But there's more to this layout than just looks. Actually, you could even say that's a side bonus with performance and handling topping the list. Placing that big 6.2-liter V8 engine in front of the rear axle moves the car's weighty stuff much closer to its core while also lowering the center of gravity. It also frees up the front of any constraints caused by the need to feed air to the engine allowing much-improved aerodynamics.

The more you think about it, the more you realize the question isn't "why did Chevrolet turn the Corvette into a mid-engine sports car?", but "why didn't they do it sooner?". Somewhere, we're sure there's an answer.

As for its opponent for the day, you probably already know everything about it. The Tesla Model Y Performance is like one of those guys that look totally harmless, but mess with them and you find out the hard way they have a black belt in Tae Kwon Do. Nothing about it screams "performance". OK, nothing apart from its name...

Pit the two together in a drag race though, and the Chevy should win it. The quintessential American sports car should hit the 60 mph mark in under three seconds, which is at least four-tenths of a second quicker than its electric rival. However, this particular race does take place at one mile above sea level (thank you, Colorado), meaning its performance could take a bit of a hit.

Well, think of the slightly rarefied air as a field-leveling handicap that will only make the contest all the more interesting and you're not far from the truth. That's because the Model Y couldn't care less about the density of oxygen and nitrogen molecules around it - to the point where it would have no problem driving on the moon.

If you thought the drag race was interesting, make sure you continue watching the clip because there's more to come. The current lap record holder on the TFL Car circuit is a C7 Corvette (of the Grand Sport variant), which immediately begs the question: can the 2020 C8 model beat it? And, if so, by how much? All answers in the video below. 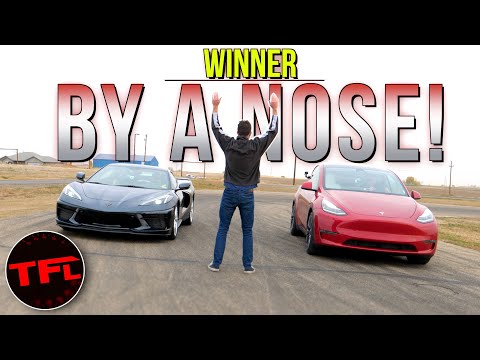