Google Has Just Fixed One of the Biggest Android Auto Annoyances

You can probably count the stock gas-powered cars that can beat a Tesla Model S Performance in a quarter mile drag race on the fingers of one hand. Well, you better grow another digit fast because the Ferrari F8 Tributo has just joined that list. Or not? Messing with the reader - one of life's little pleasures.
7 photos

You could say the F8 Tributo was more of an answer to the wonderful McLaren 720s than the Tesla Model S, and you'd be partially right. We only say "partially" because Ferrari isn't really the type of brand that bothers to answer others. Well, at least not officially.

Whatever the case, it clearly put out an excellent product in the F8 Tributo model. Being the proud owner of the most powerful V8 engine ever built by Ferrari, the F8 couldn't really be anything else other than great, even though it still is 10 HP short of the McLaren 720S' output.

Recent run ins between the two have shown just how closely matched they are. It looks as though the Ferrari is able to just blip the British model by the tiniest of fractions, but they're so tiny that any variable - drivers, conditions, tires - could tilt the scales back the other way. It's a wonderful rivalry to watch and one the McLaren desperately needed. Oh, and let's not forget about the Porsche 992 Turbo S - but more on that later.

For now, let's focus on the Ferrari F8 Tributo taking over the best Tesla has to offer at the moment: a Model S Performance Raven (with the Model 3 Performance rear motor mounted on its front axle) with all updates installed, Cheetah Stance included. In fact, if you look closely as the two cars are about to launch, you can see the front suspension on the Tesla dipping just a tiny bit.

Everybody knows what Teslas can do over short distances thanks to their incredible off the line performance, yet this rear-wheel-drive Ferrari also launches like it means business. And once containing the power to preserve traction stops being an issue, it can deploy its full might and really begin to build up speed. Is it going to be too late to catch the Model S that inevitably got ahead early on in the race? There's only one way to find out and you know what it is.

Now, for that big tease at the end: because he's a sadistic, heartless man, Brooks Weisblat shows us the first few seconds of an upcoming drag race between the Ferrari F8 Tributo and a 700 hp Porsche 911 Turbo S. Given the power output, that means we're not looking at a stock Porker, but even so it'll make for an interesting watch. 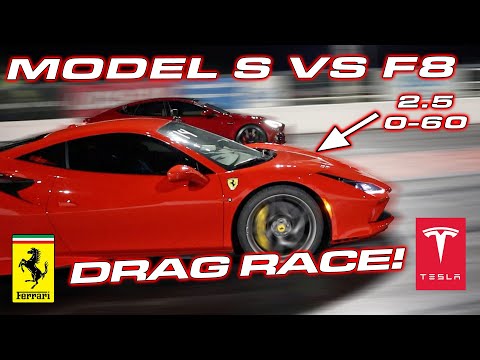