Volkswagen is currently working on a small crossover, which would become that brand’s “baby SUV.”
10 photos

It is called the T-Roc, and it will share its underpinnings and design with the next-generation Polo. The latter will be built on the MQB platform, which has been imagined from the start to be able to fit a multitude of powertrain, transmission, and drive configurations.

The new product is supposed to borrow its underpinnings from the Audi Q2, which is already on the market. The four-ringed brand has a line-up that starts with a 1.0-liter turbocharged engine that offers 116 HP, but it can go as high as 190 HP if the customer feels the need for more power on tap.

Volkswagen could offer similar power in the T-Roc, especially since clients of this segment might be interested in getting as much power as possible in the range.

Nissan, the brand that shocked the world with the launch of the Juke, offered up to 190 HP in its small crossover that was more successful than everyone expected it to become. It now has a Nismo version, and clients can get more than 200 HP from their small SUV from the Japanese brand.

Volkswagen’s development team seems to drive the T-Roc as fast as possible on the Nurburgring, and this fact could make us think that the Wolfsburg brand has planned to make it fun to drive. A car spotter named Jeroen posted a video on YouTube with the T-Roc prototype, and you can see it embedded below. It speaks for itself, if you ask us. 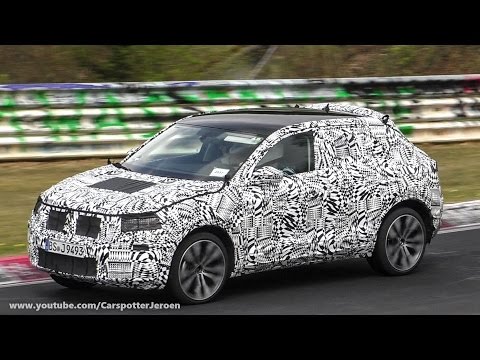