5 Audi RS Q8 Drags Mercedes-Benz GLE on Unprepped Surface, One of Them Takes a Beating

Audi entered the small-crossover market with the Q2 in 2016. It was based on the same MQB platform as many of the Volkswagen Group vehicles.

The Q2 came on a niche-market where its only true contender was the MINI Countryman. The Q2 was designed to be used mostly on cities, but due to its all-wheel-drive system, it could cope well with snow-covered roads.

From the outside, the angular design of the car was inspired by its bigger brother, the Q7, and the 2015 concept-car the e-tron Quattro. Unlike the later, it featured a silver or black C-pillar, depending on the customer. In the front, a big 3-D singleframe grille with a silver rim was installed.

The high beltline offered a massive look for the car, despite that it was only a 4.2-meter (165”) long vehicle. It could pass as a compact-hatchback if it wouldn't be with higher ground clearance.

For the interior, the Q2 was fitted with a two-tone dashboard. A part was black and the other was in the car's exterior's color. The typical Audi design was noticed everywhere. The buttons and the dials were similar to other Audi vehicles. The 2016 model was fitted with the Audi Virtual Cockpit, which offered a 12.3” screen in the instrument cluster. 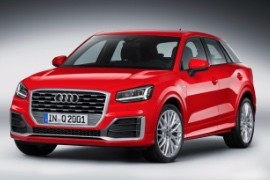