3 2018 Audi A8 Promo-Teaser Shows the Car Parking Itself

As most of you know, the current Mercedes-Benz S-Class has one of the if not the most comfortable automobile suspension in history thanks to a neat little trick involving a camera, but once the 2018 Audi A8 gets launched, it won't be the only luxury car with this technology.
1 photo
Thanks mostly to a 48-volt electrical system, the A8 D5's active suspension will be fully active and also adaptive to prevailing road conditions.

In short, each of the car's wheels will have an electric motor that is powered by the main 48-volt electrical system. Just like on the S-Class, a front camera will feed information to a central computer and detect road bumps early on. The Electronic Chassis Platform (ECP), will process the information gathered by the camera thus transmit the exact amount of travel to various actuators, thus controlling the suspension to react how it's supposed to at the right time, eliminating most vibrations and jolts.

According to Audi, the camera generates information about the road surface 18 times a second, so the car will not become less comfortable even when driven more dynamically.

However, this is where the similarities with the S-Class end, because the all-new A8 will also have rear-axle steering. Thanks to this little piece of technology, the large luxury sedan allegedly has a lower turning circle than the much smaller Audi A4.

Also as an extra compared to its rival from Stuttgart, the Audi A8 D5 will have another special feature integrated into the new 48-volt-based suspension. When sensors situated around the car detect an imminent side impact at more than 25 km/h (15.5 mph), the suspension actuators apparently raise the car's body on the exposed side by up to 80 mm (3.1 in) within half a second, if it has the time, of course. This is done to direct the collision to the stronger parts of the car, such as the door sills and the floor, Audi saying that the impact load on the occupants is reduced by up to 50 percent this way.

The 2018 Audi A8 D5 will have its world premiere at the Audi Summit in Barcelona, on July 11, with sales expected to commence by this Fall. 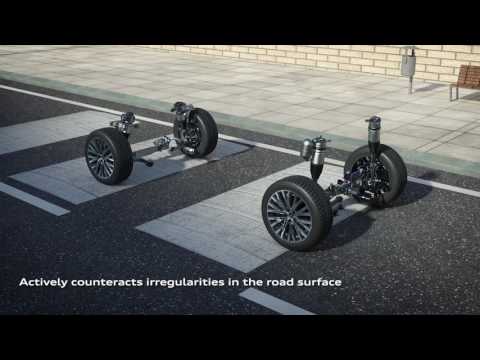