Ciprian Florea
Back in July, our friends over at American Muscle announced that a record-breaking edition of their annual Car Show is set to kick in, with no less than 1,400 Ford Mustangs to gather in Philadelphia. And they weren’t kidding! The event attracted thousands of Mustang owners and musclecar enthusiasts and celebrities such as Vaughn Gittin Jr. and the one and only Chip Foose.
1 photo
Unfortunately, we weren’t there to hear those Mustangs roar, take part in the dyno challenge or witness the giant V8 shopping cart (filled with AM girls and driven by Gittin Jr. himself), but video reports show that a huge amount of fun was up for grabs at the event.

What’s more, American Muscle managed to raise $20,552 for Alex’s Lemonade Stand, who raise money and awareness of childhood cancer causes, research into new treatments and cures, not including additional donations by Chip Foose and the organizing staff.

In addition, American Muscle handed over 17 Car Show Awards, including Best in Show, which was won by a 1984 LX, or Most Radical Engine, earned by a crazy 1983 GT Boss with 351 Cobra R block. You can find out more about the 2013 AM Show by watching the video report below. 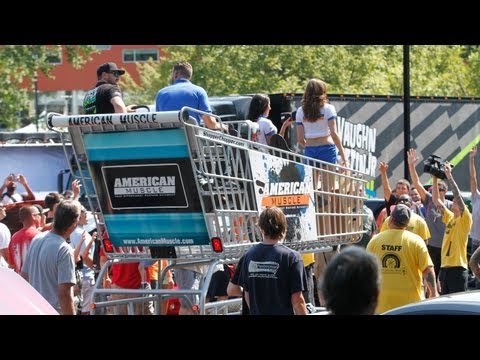