1 1974 Chevrolet Caprice Donk Is Darker Than Night Itself

Home > News > U-turn
Cristian Gnaticov
The donk virus is slowly but steadily infecting more people, but no matter how big the wheels fitted to their machines are, the designation only applies to the 1971 to 1976 Chevrolet Impala and Caprice.
14 photos

In theory, such rides should be rather on the rare side, but as it happens, they are more common than one might think. All it takes is a simple ‘donk’ search online, and you will spend numerous hours admiring such builds. That could turn into days and perhaps weeks if you dare do so on YouTube, which is where we found this particular 1971 Chevy Impala.

Sporting an eggnog color on the outside, which is apparently very close to the original shade, it has a brown roof and lots of gold accents. The shiny trim was applied to the beltline, door handles, side mirror casings, and headlight surrounds, and it is also the centerpiece of the wheels. These are 26-inch in size, were signed by Assanti, and sport a chrome lip, thus tying them to the bumpers, A and B pillars, window surrounds, and other parts of the car.

As one can expect, the cabin looks just as clean as the exterior, only here, the owner, who used to own some ’72 Impalas before, as well as another ’71, chose brown upholstery. The fine leather was wrapped around the seats, door cards, and other parts, and the design of the alloys was replicated on the steering wheels, otherwise combining the gold looks with the brown leather.

Thanks to a custom stereo, it can also get the party started wherever it goes, yet more importantly, it features a reliable engine that its owner doesn’t know much about. As a result, besides the static shots, it was also filmed on the go, and if you don’t want anyone to spoil the video, then you should click the play button after you’ve muted it. After all, it’s not like you’ll miss out on much if you do so. 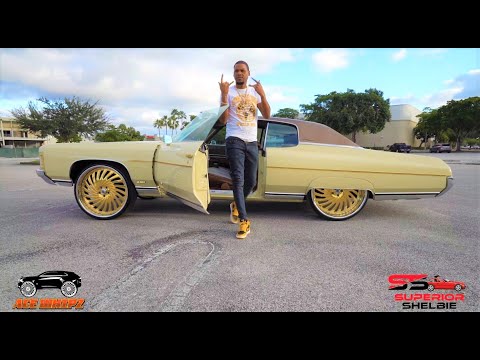