The Mk VIII came into production in 1938.

The aluminum cylinder was now standard in production and the machine was practically the same as the factory racers of Ted Mellors. The machine was only seven months in production because the rear suspension was introduced and developed for the Mk VIII. In 1939 appeared as the latest version of KTT and only 230 bikes were produced until it was out of production in 1950. It had a rear suspension with two Dowty shocks. The arc valves have been completely closed. 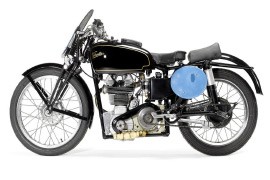