The 2015 MY Rieju Motors Marathon 125 SM sports an air-cooled, four-stroke, 125cc, single cylinder powerhouse mated to a five-speed manual transmission. It comes dressed in a 37mm telescopic fork in the front, a rear monoshock suspension, a 260mm front and a 200 mm rear disc brake, as well as 17" wheels. It is suitable for mundane tasks such as daily commuting through the urban jungle, as well as the occasional track, to get the blood pumping. 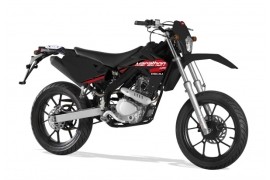 1 Rieju Is Back in the Pedelec Business