The Ariel W/NG 350 is a motorcycle produced for the British Army during the World War II era.

This machine has suffered numerous changes over the years, due to the shortage of different materials such as rubber and aluminium, later units using cloth for hand-grips or steel for footrests. At its heart lies an air-cooled, four-stroke, 348cc, single cylinder engine paired to a four-speed manual transmission, and can reach a maximum power output of 17 horsepower at 5800 rpm. 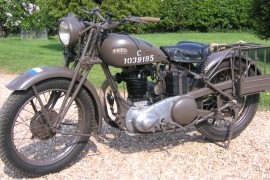 1 You Need This 1947 Ariel Red Hunter Classic Motorcycle, And You Can Probably Afford It