The smallest car from the European market, the SMART ForTwo, received a mid-life cycle impulse in 2003 for the coupe version and restyled the tiny car.

After Mercedes-Benz and Swatch watchmaker split, the German carmaker had to deal with the new brand and the MCC (Micro Car Company). Even though it knew nothing about small-sized vehicles, it pushed forward and launched the car with internal combustion engines. Swatch dropped the ball because Mercedes-Benz said that it was not a good time for an electric-only vehicle, and it was right.

On larger vehicles, it might be easier to create new lines or add further exterior details that could differentiate the refreshed version from its non-facelifted sibling. Still, on a phone-boot-sized car, it was more challenging. Still, the design team did an excellent job. There was a new pair of headlights with a shape like a tilted and skewed 8 number at the front. In the rear, the taillights sported a three-lamps system, vertically arranged on the corner, flanking the flip-down lower side of the tailgate.

Inside, SMART used a wide speedometer in front of the driver, mounted on the steering column. The carmaker offered an additional pair of dials mounted on top of the dashboard for a tachometer and a clock as an option. It was an actual analog clock.

There was a choice of three engines installed under the trunk. Mercedes-Benz upgraded all of them from their non-facelifted version. It was still the car with the smallest turbo-diesel engine in the world. 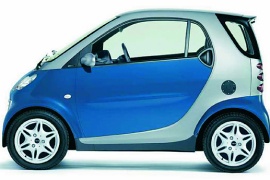